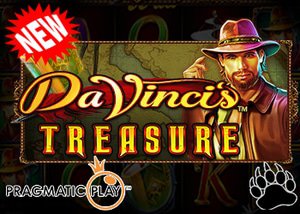 Join John Hunter on his heroic quest to locate the secret treasures of Da Vinci and benefit from lucrative rewards in the brand-new slot release from Pragmatic Play.

John Hunter a world-renowned explorer and his latest quest is to locate the secret treasures of Da Vinci. He desperately needs your help to find Da Vinci's hidden treasure and he will handsomely reward you for your efforts along the way. By using a rare map, along with Da Vinci's legendary paintings, you can help John Hunter locate the secret treasure which will lead to some extraordinary rewards.

The new slot from Pragmatic Play casino software is called Da Vinci's Treasure and its beautifully portrayed across 5 spectacular reels with 3 rows and 25 non-adjustable paylines. Players will also be treated to an array of intriguing bonus features, including wild symbols, bonus symbols, a Map Quest, a Progressive Multiplier Free Spin feature, and a Prize Picker along with a top jackpot prize of up to 8,000 coins.

Leonardo Da Vinci was a famous painter, engineer, architect, sculptor, and draftsman but in the latest slot from Pragmatic Play, he is also the wild symbol. The Da Vinci wild symbol will appear on reels 2, 3, 4, and 5 while substituting for all regular symbols to form a win, except for the bonus symbol. The gold Cryptex will act as the game's bonus symbol and will only make an appearance on reels 2, 3, and 4. Displaying 3 Cryptex bonus symbols in a single spin will activate one of three random bonus games.

The first random bonus game is a Map Quest. During the Map Quest bonus game where you and John Hunter will be transported to a map that contains 23 sports along with a Wheel of Fortune. Every point will potentially reveal a cash reward. You will need to spin the Wheel of Fortune to advance through the map until your spins are completed or when you uncover "Game Over". The second random bonus game is a Progressive Multiplier Free Spin feature. Once triggered, players will receive 12 free spins along with a 1x multiplier. After each free spin, the multiplier value will increase by 1x. You can also receive an extra 12 free spins by displaying 3 more Cryptex bonus symbols during the free spin feature.

The third and final random bonus game is a Prize Picker. During the Prize Picker bonus game, you will need to select one of three of Da Vinci's painting which will reveal an instant cash reward. What makes this bonus game even more impressive is the fact that you can gamble your winnings up to 5x to potentially walk away with a very sizable reward.

Each symbol in the new Da Vinci's Treasure slot has been carefully selected by Pragmatic Play to ensure it perfectly fits with the theme of the game. John Hunter is the highest paying symbol on the reels, paying a magnificent 8,000 coins when 5 are displayed on an active payline. He will also appear stacked on the reels at all times. The other captivating symbols include an ancient book, a backpack, a crossbow, and a mobile perpetuum. You will also find a range of playing card symbols, ranging from Ace through to 9.

When it comes to betting, you will find that the new Da Vinci's Treasure slot comes equipped with a wide variety of options. Although you can't adjust the 25 paylines, you can still choose between 10 coin levels and 6 different coin values. This will give you a minimum bet of $0.25 per spin along with a maximum bet of $125 per spin.

The new Da Vinci's Treasure slot was released in early August 2018 and is currently available at all Pragmatic Play Casinos. We at Grizzly Gambling highly recommend that you play the new Da Vinci's Treasure slot at Spintropolis Casino where you'll be treated to a $10 No deposit bonus as well as a 200% Welcome bonus up to a maximum of $2,000 for newly registered customers.