Home News Play in the WCOOP 2018 at Pokerstars

Enter the 2018 World Championship of Online Poker at Pokerstars 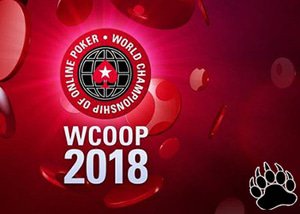 The 2018 World Series of Online Poker starts on 2 September and PokerStars will boast over $70 million in guaranteed prizes on more than 60 different events.

Have you ever wanted to be a World Champion? Well thanks to the World Championship of Online Poker, or more commonly referred to as WCOOP, you will have the perfect opportunity to become an internationally-recognised world champion while playing the game you love.

With the 2018 World Championship of Online Poker, you only need your wits to conquer the world of online poker. You merely need a little bit of luck, skill, desire, and more importantly, the opportunity. Thanks to PokerStars casino and poker room, you will get the opportunity this September.

The 2018 World Championship of Online Poker

The WCOOP will take place from 2 September until 17 September 2018 and will feature more than 60 different events across sixteen days with $70 million in guaranteed prizes up for grabs in the WCOOP events alone, making this the biggest online poker championship yet.

PokerStars will also feature Phased Events where players can claim their share of combined guarantees of more than $3 million. Players can qualify for Phase 2 on 16 September by participating in any Phase 1 tournament that starts on 12 August 2018. PokerStars will also be awarding Platinum Pass packages to 7 lucky players which include six nights accommodation in the Bahamas, $25,000 entry into the PSPC Events, and $2,000 in travel expenses.

There will also be daily satellites available in the run-up to the poker series, each with an added Main Event seat worth $5,200. In addition, players can also win a PSPC Platinum Pass by participating in the Player of the Series Leaderboard. Furthermore, PokerStars will feature special Spin & Go tournaments which will award WCOOP entries, cash, and tickets. You can find these Special Spin & Go tournaments in the Spin & Go lobby with buy-ins ranging from $5 up to $25.

The first entry that you win for the $25,000 Event or for each WCOOP Main Event will be non-refundable, non-exchangeable, and non-transferrable. Players that win multiple tickets to the $55 or $530 events can use them to access any event with the same buy-in amount after the WCOOP 2018 is completed. Any Spin & Go tickets from the WCOOP will be transferred into T$ once the WCOOP 2018 is completed. Any subsequent seats that you win to the $25,000 Event or WCOOP Main Event will be instantly exchanged for T$.

The probabilities for the WCOOP Spin & Go tournaments are subject to change. The Daily Satellites which include a $5,200 Main Event seat will feature at least one Main Event Seat that will be worth $5,200. This will also be non-refundable, non-exchangeable, and non-transferable. The overall winner of the Player of the Series Leaderboard will be awarded a Platinum Pass package. PokerStars' full terms and conditions apply.