Playtech Slots Coming To PokerStars Thanks to New Deal 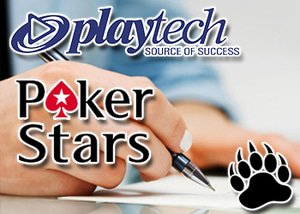 Playtech, a London-listed online gaming technology provider, has signed a deal to supply Amaya's Pokerstars brand with a range of their popular slots games.

This newly signed deal will extend the relationship that Playtech already has with PokerStars. Currently, PokerStars is served by Quickspin another games developer that was purchased by Playtech in May 2016 for €50 million.

Fans of Playtech slots games will be delighted to hear that PokerStars has already launched a number of Playtech's progressive jackpots and in-house developed games including White King, Frankie Dettori, and Great Blue. These titles are available for play on mobile, tablet, and desktop.

Other branded games that are expected to be released on the PokerStars brand include Top Gun, Gladiator, and the forthcoming DC series of slots games.

Playtech Chief Operating Officer, Shimon Akad, said, "We're delighted to have extended our existing relationship with PokerStars, one of the most established and well-known brands in the industry, and providing them with the industry's best-performing content."

PokerStars' Director of Casino, Sam Hobcraft, said, "We are very excited to partner with Playtech, and to provide our customers with some of the best slots in the industry. In particular, their suite of jackpot games will fill one of the final gaps in our product offering."

Playtech has been around since 1999 and have an excellent reputation in the online gambling market. They were the first company to incorporate VIP programs and cash back bonus incentives for players. They are also fully approved by the Alderney Gaming Control Commission. Last month Playtech unveiled three titles in their brand new series of slots games called "Age of the Gods." There will be seven slots games in total and these will also be rolled out to PokerStars. According to a company spokesperson, these games have been among the most successful Playtech launches, with the titles immediately entering the top 10 across major licensees on the Playtech casino network.

More About Amaya and their PokerStars Brand

Amaya is a Canadian-based company and they have been part of the online gambling industry since 1998. They also have an excellent reputation and purchased PokerStars, the world's biggest online poker company, for $4.9 billion back in 2014 and have been working on the brand ever since. Over the years Amaya has purchased a number of software companies including Chartwell back in 2001, and Cryptologic to help them move further into the development of online and mobile gambling. This new deal will see them adding some of the best online slots games to their PokerStars brand.