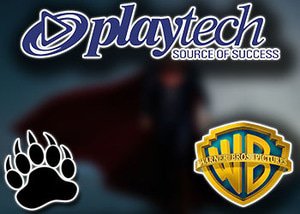 Playtech's brought a flash of new excitement to superhero fans around the globe when the world leading developer inked a licensing agreement with Warner Bros on behalf of DC Comics to developed branded video slots based on superhero films and characters over the next couple of years.

The collection of Omni-channel games will include all the most loved superhero's such as Superman based on the box office hit film released in 1978; Superman II inspired by the hit movie released in 1980; Man Of Steel based on the 2013 superhero film and Green Lantern based on the extremely popular 2011 film. Warner Bros was the distributor of all four the hugely popular superhero films, and now the multi-year contract have provided Playtech with the perfect opportunity to shine, and since last year the developer has assigned tasks to development and design teams to all studios across the globe.

Mor Weizer, Playtech's CEO released a statement to share their joy and said that the contract with DC Comics would further strengthen the premium branded and in-house created content. Weizer shared that the multi-year contract will also enable all online Playtech casinos to benefits from the new branded releases and that the entire Playtech family is excited and looks forward to a long and successful relationship with Warner Bros.

Playtech's new Superman I slot is scheduled for released on the 24th of February 2017 and superhero fans get the opportunity to assist Superman to beat the megalomaniacal machinations of Lex Luther in an adrenalin charging action packed 100 payline video slot. By successfully defending Hoover Dam players get rewarded 10 locked wild spins and even though it might look like the end when the dam bursts, Superman turns back time and this time wins are boosted via locked wilds while the main aim remains to hit the progressive jackpots.

These video slots offer gaming action inspired by the superhero actions of Clark Kent and his mission to save humanity from evil. Bonus assistance in the battle for exceptional winning includes wilds, a world engine bonus round, Krypton free spins, the battle for earth free spins and superman versus general Zod shifting wilds, Playtech fans can now enjoy all the best superhero action at Slots Million Casino.