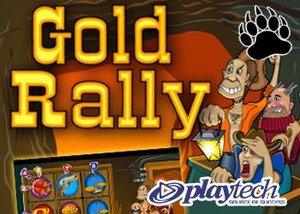 Gold Rally slot got a punters heart racing when it awarded a staggering jackpot prized worth $763,719, which was the second time this Playtech created game felt generous in a matter of two weeks.

Released in 2004, Gold Rally is one of the 3-reelers that are part of the Playtech Jackpot collection that endured the test of time, despite its age it remains one of the most enjoyed and exciting games while it is favoured for its staggering jackpot by both classic and video slot fanatics.

It is the gold mine theme that appeals to players, ensuring constant returns, and prospecting for gold takes place in the presence of three of three miners in a mining card on the right side of the 3x3 grid.

Even the paylines are inventive in Gold Rally slot and it is possible to profit from winning combinations horizontally, vertically and diagonally. Players get to select the number of coins and paylines and by activating all paylines the maximum payout opportunities is always in action. Tipping the scales to your benefit has new meaning as the scattered scales awards winnings worth up to 200 times the triggering bet and it is the symbol most deserving of players primary focus should their goal be claiming the progressive jackpot.

The bonus round comes into play once all four the screen corners are filled with dynamite and then the bonus round offers an explosive burst of excitement as the treasure map is found. The player is put in charge of the hunt for gold and gets to select the location, miners grab pickaxes and dig for gold nuggets. Anything the minors find can be selected and should players stumble upon treasure they could get the change to continue the gold-digging action.

Gold Rally is one of the best Playtech jackpots and with good reason. The biggest jackpot payout was in November 2013 when a player became $6,347,118 richer. Maybe the game will soon become known as the best "reel" Santa as it just surprised a winner right before the festive season with a fantastic payout of $763,719 which will undoubtedly alter the Christmas holiday plans significantly.