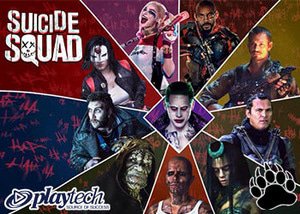 Suicide Squad is one of the most anticipated movie adaptation slots from Playtech and you can join the gang of DC supervillains exclusively at Paddy Power Casino.

Comic books are renowned for their heroic characters, but you'll also find loads of iconic villains that have been created over the years as well. While most stories feature superheroes that take down evildoers, sporadically even the bad guys get the opportunity to do some good. That's the story behind Suicide Squad, a highly-anticipated movie that was released in 2016 as part of the DC Extended Universe.

Now, slot enthusiasts can indulge in the same story while playing the new Suicide Squad slot from Playtech casino software. With 5 reels and 50 non-adjustable paylines, players will be introduced to a phenomenal range of rough and tumble characters along with a remarkable selection of bonus features to keep them entertained. The bonus features include Suicide Squad Wilds, an Enchantress Mode, and four progressive jackpots up for grabs.

The new Suicide Squad slot features five of the most popular DC supervillains from the movie, including Deadshot who pays the highest jackpot prize worth 250 coins, Harley Quinn, the Joker, Katana, and El Diablo. The other symbols include a golden cross, Harley Quinn's baseball bat and necklace, the Joker's razor blade, a pair of boomerangs, and Katana's mask and sword.

When it comes to betting options, players will be pleased to know that the new Suicide Squad slot features plenty of flexibility, catering to both beginner and high roller alike. Although you can't adjust the 50 paylines, there are 20 different betting options at your disposal. You can start your reel-spinning adventure at a mere $0.50 per spin or enjoy the maximum bet amount of $500 per spin.

Where to Play the new Suicide Squad Slot

With a return to player ratio of 94%, the new Suicide Squad slot will soon be available at all Playtech casinos. In the meantime, you can play the new Suicide Squad slot at Paddy Power Casino where you'll be welcomed with a 100% match bonus up to a maximum of $100 along with a sensational range of banking options to easily fund your casino account.