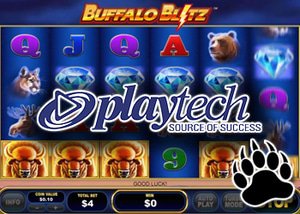 Buffalo Blitz, a Playtech slot that featured 4,096 ways to win on 6 reels will have you feeling an energy that is tough to match. This slot comes with some excellent and valuable features, with this being evident by the chance to win up to 100 free spins. The addition of a wild symbol, stacked buffalos on its reels and up to a 5x multiplier only amplify the opportunities this game brings to the table. The buffalo theme is one that has proven to be popular among players, and this slot is sure to follow in that foot step.

All of its symbols are those one would expect to find when out for a walk in nature. Showcasing this is a bear, moose, raccoon, and lynx tiger. The main symbol to keep watch for is the buffalo as it is the highest paying from those mentioned. While most new releases of the day are full of intense graphics, Playtech has chosen a more classical look and kept things simple. The use of splashy images behind the reels or animated images moving across the screen in the border surrounding the game has been left out of the design. Instead, you are greeted with a dark blue color and scenery that is reminiscent of the American plains where the buffalo roam.

The gameplay was found to be a little slower than most slots, but more than acceptable. The one negative is the time that is taken before the option to stop manually the reels activates. Those that like to spin/stop the reels at a rapid pace will find this somewhat of a deterrent, but with the possibilities this game offers, it is a small part of things. The sounds are nice and offer both a mix of uniqueness as well as classical in nature.

As with most online slots, game features often become the highlight and can make or break a slot. Buffalo Blitz has three to mention, with the first of those being the wild symbol. This is depicted by the diamond, which really doesn't fit with the theme but is a nice touch just the same. This diamond takes effect on the 2nd, 3rd, 4th, 5th and 6th reels, so it can have great value. It also will randomly award a multiplier of 2, 3 or 5x.

The final of the three isn't so much a feature but could be considered one. This is related to the buffalo and with it appearing stacked on all six reels, it can have an incredible impact. While its max pay is only 300 coins, when you consider that there are 4096 ways to win, with the possibility of a full screen of buffalo symbols, the rewards can be mind-boggling, to say the least, even with the minimum bet in play.

While it's not the best Playtech slot machine to be revealed, Buffalo Blitz is a solid addition from Playtech. It meets the grade on multiple levels, especially for fans of the popular buffalo theme slots that grace most land based casinos. The potential payouts are enormous, making this an ideal slot for both low rollers as well as high rollers. Looking for a place to play for real? Check out Sports Interaction online casino for an All-Canadian experience.