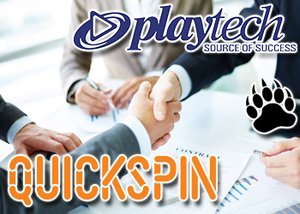 Online gambling software provider Playtech acquires Quickspin in a deal that will see them take over the Swedish slots developer.

In a recent statement, Playtech stated that they have agreed to pay €24 million upfront to acquire Quickspin, with a further consideration of up to €26 million based on a maximum of six times Quickspin's 2018 earnings. In 2015, Quickspin reported earnings of €2.1 million with revenue of €6 million.

CEO Daniel Lindberg and CPO Joachim Timmermans, the founders of the Stockholm-based Quickspin AB, have both agreed to stay on for at least three years after the completion of the acquisition by Playtech.

Playtech have stated that this deal will boost their existing slots portfolio as well as strengthening their position in the Nordic markets. Quickspin has over 20 slots games which they provide to over 40 B2B clients. Their slots games include Genie's Touch, The Wild Chase, Second Strike, Razor Tooth, Fire Storm, and Treasure Island. The games can be found at Slots Million casino and Bet365 casino. They were also shortlisted in four categories in the EGR B2B Awards in 2015. Playtech plans to distribute the Quickspin catalogue through their existing distribution channels across all their platforms.

Playtech has a sizable sum of cash put aside for acquisitions. They missed out on their big to acquire rival software provider OpenBet recently which was purchased by the NYX Gaming Group with some financial support from William Hill and Sky Betting & Gaming. Playtech have suggested that they will be considering returning some of the surplus cash to their shareholders if they fall to pull off a major acquisition.