Viking Runecraft Nominated for EGR's Game of the Year 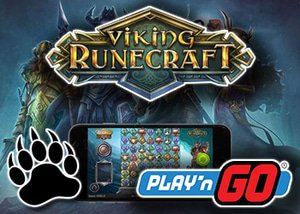 The game of the year category recognises the software developer that has produced the standalone game that made the biggest impact during the year.

Stringent judging and fierce competition take place between shortlisted games to claim the prestigious Game Of The Year EGR Award.

Play'n Go fans are delighted with the announcement made by the award-winning developer that its Viking Runecraft video slot has been nominated for this year's EGR award. The 2017 EGR awards ceremony takes place on the 26th of October at the Grosvenor House in London.

Play'n Go's Viking Runecraft slot utilises cascading reels to honour the adventurous and brave Norse gods, worshipped by ancestors for millennia. Numerous unique bonus features and extensive gameplay has made it one of the most successful games to date designed by Play'n Go. Viking Runecraft slot enjoyed record-breaking turnover since its launch and is comfortably outpacing the slot market average while it is still gaining momentum. Stunning soundscape and striking graphics bring the market-leading title to live, while players are set for massive victories during their journey through a mythological world, accompanied by Fenrir, Loki and Thor.

John Tornqvist, Play'n Go's CEO shared the developers delight during a press conference saying that Viking Runecraft slot has enjoyed huge success since it was released earlier this year. He was thrilled with the EGR nomination and thanked Play'n Go developers and designers for producing Viking Runecraft. Play'n Go is no new contender for the Oscars awarded in the online casino industry since Grim Muerto was nominated for the 2016 Game of the year EGR award.

Online players who wish to enjoy the immersive and hugely enjoyable Play'n Go Viking Runecraft Slot can be enjoyed atSlots Million Casino, one that features all the best-of-breed titles from several software developers.