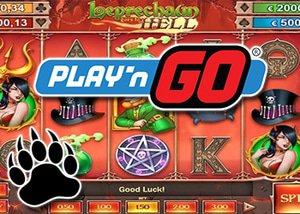 The latest Play'n Go slots game is called Leprechaun Goes to Hell and this is the fifth title that this software developer has created specifically for Unibet's sites. It follows on from the success of the Leprechaun Goes to Egypt slot.

Martin Zettergren, chief operating officer at Play'n Go said, "We are thrilled to launch another premium, exclusive title with our partners Unibet. Leprechaun Goes to Egypt was immensely successful for both parties and we're extremely happy with the beginning of Leprechaun's new adventure."

Fredrik Kjell, head of gaming at Unibet, said, "Play'n Go is known for their innovative, premium game design, so we're excited to be able to partner with them on another bespoke title for our players."

This is a five reel game with 25 pay lines that features the characters Evilene and her faithful sidekick Leprechaun. This new slots game takes place in a fiery landscape of treasures displayed across the reels. It includes a re-spin and free spins feature, as well as a fiery inferno bonus game where players can win up to two fixed and two progressive jackpots.

As you would expect from a software studio such as Play'n Go, the graphics are top notch, making use of every corner of the game screen. This video slot has a unique theme and is already being hailed a summer success.

Leprechaun Goes to Hell slot has a number of bonus elements such as wilds, free spins with multipliers, and a special 3-reel bonus game. Players can expect to find a slots game with flames and scorching hot colors. The symbols are also associated with hell and include top hats with bones and skulls, pentagrams, insignias, golden tridents, and vials of steaming green potion.

Evilene is the scatter symbol and she also helps players to double their standard play wins by doubling any wild winning combination. If you get three Evilene symbols, a special 3-reel, 5 pay line bonus game begins and this has one of four progressive jackpots that players can win. There is also a pot of gold scatter symbol in this Play'n Go slots game and if you get three of these you are rewarded with 10 free spins with a 2x multiplier. The multiplier increases up to 10x every time another three pots of gold appear during the free spins round.

Speaking about this latest slots game, Play'n Go said, "Unibet players have already taken to the new title in their droves and we're delighted with the early performance data from the game. Leprechaun Goes to Hell is set to be a sizzling summer success.