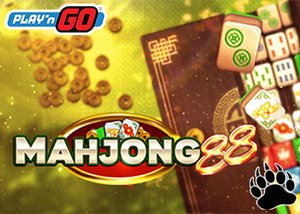 Get ready to enjoy a unique fusion between the oldest tile game and a modern video slot when you indulge in the latest slot creation from Play'n GO.

Mahjong is considered one of the most popular tile-based games in the world that were originally developed in China during the renowned Qing dynasty. Since its inception during the early 20th century, it has managed to spread across the world. The game is widely played in South Eastern and Eastern Asia and several Western countries as well. It's, therefore, no surprise that the renowned software developer decided to fuse this popular tile-based game with a modern online video slot packed with plenty of rewards and cash prizes to keep players intrigued.

The latest slot game from Play'n GO casino software is called Mahjong 88 and it features a truly unique 8x8 reel structure along with a plethora of Chinese inspired bonus features to make it even more attractive. This includes a Fortune Frog feature, a Super Charge feature, multipliers, and 4 different seasons with 4 separate wild symbols along with a top paying jackpot bonus worth 5,000 coins in the base game.

With a mesmerizing Chinese look and feel, the new Mahjong 88 slot from Play'n GO comes equipped with 8 reels and 8 rows where players will need to form clusters to unlock winning combinations. Clusters of 4 to 12 symbols can be formed vertically or horizontally. Should a player form a winning combination, the winning symbols in that cluster will be removed to make space for new symbols, allowing players to win even more. This feature is essentially known as Cluster Pays.

To make the new Mahjong 88 slot even more appealing, Play'n GO decided to add 4 seasons to the equation, including winter, autumn, summer, and spring. Each season comes with its very own wild symbol that will be activated whenever a player doesn't trigger a winning cluster on the reel set. The seasons will change at random every 25 to 99 spins. It's also worth mentioning that a Season Bonus will accumulate during play that will be paid out before the season changes.

The new Mahjong 88 slot not only boasts with an extraordinary selection of bonus features but also comes equipped with a fantastic variety of betting options to accommodate both high roller and newcomer alike. Players will be able to start their Chinese-inspired slot adventure from as little as $0.10 on a single spin or go for glory with a maximum of $100.00 on a single spin.

Where to Play the New Mahjong 88 Slot

The new Mahjong 88 slot is regarded as a high variance slot that provides a magnificent 96.62% return to player ratio. We assessed all Play'n GO casinos and highly recommend that you play Mahjong 88 at Nordic Slots Casino where you'll receive 100% welcome bonus up to $100 on your initial deposit.