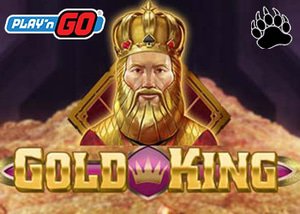 Everybody wants to be a king. From ruling a glorious kingdom to visiting the royal treasury filled with an endless field of gold. There's absolutely no downside to this royal and noble rank. Well, thanks to the latest slot title from Play'n GO, players don't have to be crowned king to gain access to the royal treasury. They only need to visit their favourite Play'n Go casinos and enjoy the rewarding experience of the new Gold King slot.

Play'n GO is a Swedish game developer and has been in the online gaming industry since 1997, producing a series of exceptional online casino games for several leading operators. Most slot titles from the company are developed completely in-house and their portfolio of slots feature multiple bonus features and sensational graphics that keep players truly entertained and coming back for more.

The new Gold King video slot from Play'n GO offers 5 reels and 20 fixed paylines. If you are fond of gold, you are going to fall in love with this slot, as the king will generously shower you with golden treasures beyond your wildest dreams. The game takes place in the treasury room of the king with piles of gold displayed on the reels.

The theme of this exciting new video slot is based on King Midas, the legendary king who had the ability to transform everything he touched into pure gold. Apart from King Midas, players will also be accompanied by a variety of fascinating symbols to boost their bankroll, including golden crowns, gold bars, jewellery, and gold-infused card symbols. There's also a range of in-game features to make the game even more enjoyable.

The Gold King video slot offers three special features that are sure to provide plenty of winning possibilities. During the base game, on every spin, one symbol will be randomly selected that could occupy 12 symbols in a stacked formation, known as the Super Stack feature.

The last special feature is activated by the king himself, acting as the scatter symbol and awarding players 10 free spins when he appears on reels 1, 3, and 5. During the free spin feature, additional free spins can be earned by displaying scatter symbols and low paying symbols will appear stacked on the reels while high paying symbols are transformed into expanding symbols. Even the Golden Rose Wild symbol can appear stacked on every reel, making this a truly rewarding free spin feature.

Where to Play the new Gold King slot

The Gold King video slot can be played at Play'n GO powered sites like Slots Million Casino on both PC and mobile devices. Players are welcomed with a generous 100% welcome bonus of up to $100 along with 100 free spins spread across 5 consecutive days.