Play'n Go Announce Release Of Two New Free Slots - Which One Is Best? 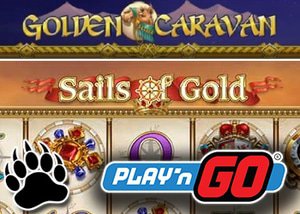 Play'n Go have just announced the release of two brand new games as they continue to add to their already impressive collection.

Released on April 21, 2016 slot players will have the choice to sail the seas with their Christopher Columbus Sails of Gold or if in a more audacious mood and ready for an Arabian adventure the Golden Caravan slots is bound to impress, with its higher volatility accompanied with its larger payouts.

Sea And Land Adventures - Ready To Make The Heart Race!

The two Play'n Go games although different are bound to become favorites with their attractive payouts and first class graphics. Firstly the Sails of Gold game is based around the adventures of Christopher Columbus and his journeys across the seas and exciting discoveries.

This video bonus slot from Play' n Go is set on the high seas and is played out over 5 reels with 10 paylines and can be played on all mobile devices, tablets as well as desktop should you so desire. The reels include various symbols including a Ship, Compass, variety of Royal Crests, and of course Columbus himself. Our hero is the slot's Wild feature whilst the ship is the game's Scatter, which also unlocks the game's Bonus feature.

The main Bonus feature of this slot is it's Free Spins which are activated when landing 3 of the Ship Scatter symbols along reels 1, 3 and 5. Players get to collect 10 Free Spins, and the Ship Scatter also gets to become an extra Wild symbol in the process. In addition during this session the Free Spins feature can be re-triggered, and there's a top payout of 5,000 x for lucky winners who land all five Wilds.

The second game released is Golden Caravan and takes the form of an Arabian adventure. This too can be played on tablets and mobiles for players on the go and this video bonus slot too has 5 reels and 10 paylines, with its mid-eastern theme centred around the exploits of the merchant traveller from Venice, Marco Polo.

In this game you will want to collect high value symbols such as the Bearded Bedouin Jewel Broker. Spin yourself 5 of these little beauties and it's time to celebrate a 5,000 x your total bet win. Both Play'n Go games come with a decent 96% plus RTP the key differences being, the Sails of Gold is a low volatility game and Golden Caravan is High Volatility. See which one you like the most, time to have some fun with the other pirates at the Wild Sultan Casino!