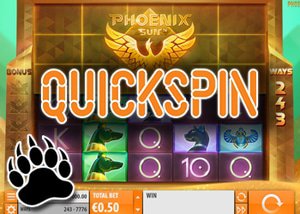 Quickspin released their latest slot, Phoenix Sun, on the 13th of December 2016, making it a perfect game to play for the holiday season as revelers gear up for New Year's Eve celebrations and welcoming in 2017!!!

Phoenix Sun Slot machine is a 5 reel, 243 ways to win Quickspin video slot. This slot has been released across all platforms including desktop, tablet and mobile devices and offers illustrations displayed in high-definition format with each detail in this games design being revolutionary. With symbols that include Anubis, Scarab, Bastet, Tutankhamun, and Cleopatra, it is sure to thrill Egyptian enthusiast.

Based on the legends of the Ancient Phoenix, the theme will remind you of Ancient Egyptian mythology, and the superb, ultra-high definition video format lets this theme come alive. The game starts at a 3x5 layout that has 243 ways to win and will grow whenever the Phoenix Wild makes an appearance. This initiates the Phoenix Rising re-spin feature that will see three tiles removed with each re-spin won. The re-spins continually being initiated one after another can allow for a 6x5 layout and this will occur until no more Phoenix Sun wilds are appearing on the reels.

Collecting five Phoenix Sun Wilds will trigger eight free games where the layout will increase to 6x5 layout comes into play. The free spins have a total of 7,776 ways to win, and that can award up to 1,716x your bet with each free spin.

There are numerous slot games based on ancient cultures. Phoenix Sun offers something different than those games, both in the sense of how it looks and how it plays. Graphics are fresh, feeling modern and up to date for current technology. In terms of volatility, this is a medium-high variance game, offering a balanced opportunity at big wins. The theme doesn't feel familiar, resulting in unique gameplay.

This slot is sure to provide countless opportunities for those who play it! The game holds a 96.08% payout percentage, and it is anticipated that this will be one that defines Quickspin and their future as a developer. Try it out today at Slots Million casino online. Happy Holidays!