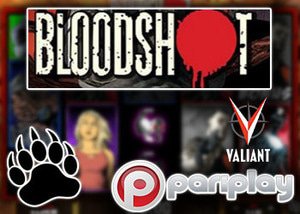 The new Bloodshot slot is themed on the iconic and award-winning comic book series circulated by Valiant Entertainment. When Pariplay and Valiant Entertainment teamed up, a newly-innovated HTML5 slot was produced that enables players to launch this exciting video slot across all devices including smartphones and tablets as well as desktop. The slot features free spins, a bonus multiplier and expanding and sticky wilds. Players will also benefit from the title's return to player (RTP) ratio of 95.08%.

Bloodshot is one of the most thriving and enduring comic book characters of the past two decades. More than 100 issues have already been circulated as well as a lifetime of sales of more than 7 million copies in multiple languages across the globe. Software provider Pariplay remains faithful to the initial comic book parable of a former soldier gifted with superhuman strength abilities, self-healing and the skill to shape-shift as he pursues revenge against the government agency and the mob who malformed him.

Enthused with stunning razor-sharp, blood-soaked visuals that do justice to the original artwork, this 5-reel, 25-line slot also boasts with a gripping soundtrack that absorbs players in the action. It comes with randomly added wilds and a bonus wheel that awards multiplier prizes or 1 of 2 free spin rounds. Play from between $0.40 and $40 per spin. Symbols include armour, grenades and an assortment of weaponry. They are joined by a quartet of characters from the comic book. The most rewarding of these is boss man Don Gino Canelli. Land 3, 4 or 5 of these and you'll pocket 60, 140 or 1,500 coins. There's also a wild that can land anywhere on the reels and replace all other symbols bar the bonus. Landing 3, 4 or 5 reels on a payline awards 100, 250 or 2,500 coins. The wilds are also central to the most regularly hitting feature. Wild Nanites Random Wilds feature - on any spin, a nanite can roll onto the reels and in the process, drop a random collection of extra wilds onto the reels. These will then be in play on the spin that follows. Bloodshot himself is the game's bonus symbol - land 3, 4 or 5 of these anywhere on the reels on the same spin and you'll trigger the Bonus Wheel feature. Here you get to spin a wheel. Depending on where the pointer lands, you'll receive a multiplier prize which is applied to your total bet or 1 of the 2 free spins features namely Wild Nanites Free Games feature and Blood Shot Attack Free Spins feature.

The slot has multilingual functionality and is available in simple Chinese, German, Swedish, Portuguese and four other languages as well as English. The title has been granted certification from the UK Gambling Commission, the Isle of Man Gambling Supervision Commission and the Malta Gaming Authority.

General Manager at Pariplay Ltd, Adrian Bailey stated the following: "We're excited to unveil Bloodshot®, our latest branded video slot, following our release of various Atari-branded casino games in 2016 and into Q1 2017. Bloodshot is one of the most popular recent comic book superheroes in the entire genre. We are confident that the new slot, which pays homage to the original comic and also provides the added entertainment value of real-money wagering, will be a significant success."

President of Consumer Products, Promotions & Ad Sales at Valiant Entertainment, Russel Brown commented the following: Bloodshot® is one of our most iconic comics heroes and boasts a legion of fans around the world. We're delighted to see Pariplay develop a state-of-the-art video slot that will bring the character to life and enable Valiant to reach and engage new customers with thrilling gameplay and state-of-the-art graphics."

The new Bloodshot slot will appeal to all comic book fans and even if you are not a fan, the extra features make it worth a look even if you've never set eyes on the Blood Shot comic book before. You can test your fate by playing this slot at Omni Slots Casino.