Play the new From Dusk Till Dawn slot from Novomatic 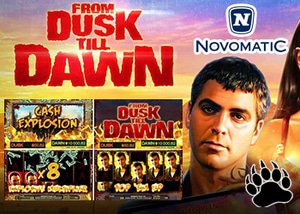 Relive one of the most iconic films ever made with jaw-dropping animations and graphics along with plenty of unique bonus features in the latest slot release from Novomatic.

From Dusk Till Dawn recently celebrated its 20th anniversary and will always be remembered for providing one of the biggest plot twists in movie history. It initially started out as a gripping crime thriller where it suddenly transformed into a captivating horror vampire movie that took everyone by surprise. Players can now relive one of the greatest cult movies of all time in the latest slot adaption from Novomatic.

From Dusk Till Dawn Slot Features

The new From Dusk Till Dawn slot is marvellously portrayed across 5 reels with 4 rows and features 50 non-adjustable paylines. Players can also look forward to a plethora of sensational bonus features, including 3 randomly triggered bonus rounds during the base game as well as a Twister Wheel bonus feature which has the potential of unlocking 2 additional bonus rounds leading to even more handsome rewards.

Players are treated to three fantastic bonus rounds during the base game and all of them can be randomly triggered on any spin, each offering the potential of rewarding you with some serious payouts. The three bonus rounds include 'On the Run', 'Cash Explosion', and 'Everybody Be Cool'.

During the 'On the Run' bonus round, a getaway car will race across the reels and transform a random number of symbols into additional wild symbols, while the 'Everybody Be Cool' bonus round will transform all character symbols into Seth Gecko, the highest paying character symbol in the game. Lastly, the 'Cash Explosion' bonus round will multiply your winnings up to 25 times every time your total win amount matches or exceeds your total bet amount.

Apart from the extraordinary base game bonus rounds, there's also a Bonus Twister Wheel feature which is triggered by displaying 3 or more Bonus Twister scatter symbols anywhere in view. Once activated, players will need to spin a wheel to either receive instant cash prizes or unlock one of two additional bonus rounds, including the Dancing Bonus feature and the Mugshot Bonus feature.

The Dancing Bonus feature will reward you with 10 free spins and will transport you into the famous Titty Twisters bar where Salma Hayek will represent the dancing wild symbol that can change both position and size with every spin, covering up to 12 symbols on the middle 3 reels. There's also the addition of an Xtra Stack feature that can change all symbols on reels 1 and 5 into the same symbol for even more winning opportunities.

The Mugshot Bonus feature will initially reward you with 3 free spins and will be played on 15 reels. You will only find Richie, Seth, Level Up, and Change symbols during this bonus feature with a cash bonus being rewarded every time you display Seth or Richie on the reels. The character symbols will remain on the reel set, resetting each time a new character symbol is displayed. The Change symbol will transform all Richie symbols into Seth symbols and the Level Up symbol will increase the value of each symbol.

Where to Play From Dusk Till Dawn Slot