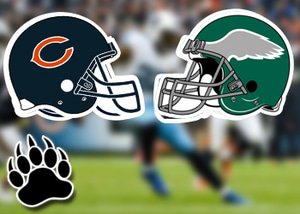 Thanksgiving is perhaps one of the greatest football weeks in the NFL season usually providing Turkey Day drama, but for the most part it offers bettors the opportunity to see which teams will be in the playoffs. We have finally reached that magnificent time in the NFL season when playoff implications are in play and bye weeks are over. There are three Thursday games to look forward to in Week 12, and two of them consist of teams with playoff hopes. These include an NFC North showdown between the Detroit Lions and the Minnesota Vikings, a mid-afternoon game between the Dallas Cowboys and the Los Angeles Chargers, and an evening matchup between the Washington Redskins and the New York Giants. There's also a thrilling matchup to look forward to on Sunday when the Rams and the Saints clash in Los Angeles. We at Grizzly Gaming continue to do the necessary research to provide you with the top three football games each week, and this week is no different. Although we can't guarantee that every game will pan out as we predicted, you will still get valuable information in our article to assist you with your football sports betting action in week 12.

A couple of the season's surprising stories are starting to take shape as the new reality in the NFL league. Week 11 of the NFL saw an unexpected game with Case Keenum and Adam Thielen, currently the second-leading receiver in the NFL, powering the Minnesota Vikings to a brilliant win over the NFC West division-leading Los Angeles Rams. Meanwhile, the smoking-hot New Orleans Saints defied probability thanks to an overtime win against the Washington Redskins, while the Jacksonville Jaguars managed to complete their sweep of the AFC North division by beating the Cleveland Browns. However, as much as week 11 might have reinforced the changing of the guard in most divisions, others had a more familiar outlook: The New England Patriots controlled the entire game against the Oakland Raiders in Mexico City, and the Buffalo Bills might have played themselves out of a spot in the playoffs due to Nathan Peterman's 5 interceptions in the first half.

The Detroit Lions and the Minnesota Vikings will meet on Thanksgiving at the Ford Field for mid-afternoon NFL action. The Minnesota Vikings are looking for seven straight victories to maintain their pace for the top spot in the NFC. The Vikings have managed to win three straight games on the road. Case Keenum is completing 65.7% of his passes for 2,194 yards, 5 interceptions, and 12 touchdowns. He has 1 or less TD passes in 5 of his last 7 games. Adam Thielen, along with Stefon Diggs have 8 touchdowns and 1,448 receiving yards combined, while Kyle Rudolph is sitting with 42 receptions. The ground game of the Minnesota Vikings is averaging 123.3 yards per game, and Latavius Murray is leading with 4 touchdowns and 412 yards. Defensively, the Minnesota Vikings are allowing 290.5 yards and 17.2 points per contest. Harrison Smith has a total of 3 interceptions, Everson Griffen has 10 sacks, and Eric Kendricks leads the Vikings with 75 tackles.

The Detroit Lions will be looking for four straight victories in the hopes of making the postseason. The Lions have managed to lose 3 of their last 4 games at home. Matthew Stafford is completing 63.1% of his passes for 5 interceptions, 19 touchdowns, and 2,760 yards. He has 2 or more TD passes in 5 of his last 6 games. Golden Tate, along with Marvin Jones Jr. have 9 touchdowns and 1,313 yards combined, while TJ Jones is sitting with 24 receptions. The ground game of the Detroit Lions is averaging 80.8 yards per game, and Ameer Abdullah is leading with 3 touchdowns and 491 yards. Defensively, the Detroit Lions are allowing 354.5 yards and 23.4 points per contest. Darius Slay has 4 interceptions, Anthony Zettel has 6 sacks, and Tahir Whitehead leads the Lions with 61 tackles.

The Spread: Vikings vs. Lions

The Minnesota Vikings are certainly one of the best teams in the NFL league, as their defense has only allowed 17 or less points in 7 of their last 8 games while their offense does enough to close the deal. The Detroit Lions have been a hit or miss for the entire 2017 NFL season and haven't managed to play well at home. However, let's not forget that they are currently on a three-game winning streak and the team is comfortable playing on Thanksgiving as they've managed to win 4 straight games in the past. On the other hand, Stafford has a ruthless record when playing against winning teams, making the Minnesota Vikings an obvious choice. Although everything is looking up for the Vikings, we will be backing the Detroit Lions. The Lions are due for a win and they look like a team that is ready to take the next step by winning at home.

The Philadelphia Eagles and the Chicago Bears will meet at the Lincoln Financial Field on Sunday evening for some NFL action. The Bears have lost 3 of their last 5 games on the road. Mitchell Trubisky is completing 53.1% of his passes for 988 yards, 2 interceptions, and 4 touchdowns. He has 1 or less TD passes in every game for the 2017 NFL season. Kendall White, along with Tarik Cohen have 2 touchdowns and 589 receiving yards combined, while Zach Miller is sitting with 20 receptions. The ground game of the Chicago Bears is averaging 131.8 yards per game, and Jordan Howard is leading with 5 touchdowns and 841 yards. Defensively, the Chicago Bears are allowing 319 yards and 22.1 points per contest. Danny Trevathan has 1 interception, Akiem Hicks has 7 sacks, and Christian Jones leads the Bears with 65 tackles.

The Philadelphia Eagles are looking for nine straight victories to get closer to taking the top spot in the NFC. The Eagles have managed to win 7 straight games at home. Carson Wentz is completing 59.6% of his passes for 2,430 yards, 5 interceptions, and 25 touchdowns. He has 2 or more TD passes in 6 straight games. Alshon Jeffery, along with Zach Ertz, have 12 touchdowns and 1,103 receiving yards combined, while Nelson Agholor is sitting with 30 receptions. The ground game of the Philadelphia Eagles is averaging 144.6 yards per game, and LeGarrette Blount leads with 561 yards and 2 touchdowns. Defensively, the Philadelphia Eagles are allowing 306.8 yards and 18.8 points per contest. Jalen Mills has 3 interceptions, Brandon Graham has 6 sacks, and Nigel Bradham is leading the Eagles with 56 tackles.

The Spread: Bears vs. Eagles

We've been on the Eagles bandwagon for the last few weeks, and we've managed to make some decent money by backing them in recent blowouts. The main issue is once bettors start falling in love with these teams, and receive more love from the media, these types of betting lines start to appear. The Philadelphia Eagles are starting to look like the Golden State Warriors in the NFL, a remarkable team but usually get way too many points. The Bears aren't considered a great football team and perform much better at home as opposed to playing on the road. However, 5 of their last 7 losses have been decided by 8 or fewer points. The Chicago Bears outplayed the Detroit Lions for 3 quarters last week, had a chance to beat the Packers the week before, and took the New Orleans Saints down on the road. The Eagles should have no problem against the Bears this weekend, so we are siding with the Eagles to win the game by at least two touchdowns.

Jacksonville Jaguars (7-3) at Arizona Cardinals (4-6): Second Upset of the Week

The Arizona Cardinals require a much-needed win after losing 4 of their last 6 games. The Cardinals have managed to win 4 of their last 7 games at home. Drew Stanton is completing 48.4% of his passes for 540 yards, 2 interceptions, and 3 touchdowns. Stanton only has 139 pass attempts in the last 2 years. J.J Nelson, along with Larry Fitzgerald, has 1,120 receiving yards and 6 touchdowns combined, while Jaron Brown has a total of 24 receptions. The ground game of the Arizona Cardinals is averaging 69.3 yards per game, and Adrian Peterson is leading the way with 369 yards and 2 touchdowns. Defensively, the Arizona Cardinals are allowing 344.2 yards and 25.4 points per contest. Antoine Bethea has 3 interceptions, Chandler Jones has 10 sacks, and Tyvon Branch is leading the Cardinals with 69 tackles.

The Spread: Jaguars vs. Cardinals

Claiming back-to-back games on the road isn't an easy task for any NFL team, but this is a matchup the Jacksonville Jaguars should be able to win. The Cardinals have a lacking offense and their 4 victories were against teams with a combined record of 8-22. The Jaguars don't play the most captivating football, but their defense ensures that nothing easy gets past, while their offense does enough to claim a victory. Jacksonville is only allowing 7.75 points per matchup during the last four-game winning streak, and that's quite impressive regardless of how you look at it. Therefore, we are backing the Jaguars to win the game by a touchdown.

Week 12 will have plenty of football action available on Thanksgiving Thursday along with more excitement on Sunday and Monday. There are some extraordinary matchups lined up this week that is sure to provide a few incredible moments to make a winning bet. Apart from the 3 sensational NFL games on Thursday, you can also look at the other upcoming games at Sports Interaction. There's also plenty of other Canadian sportsbooks that offer competitive odds in the NFL, including Pinnacle Sports, so make sure to compare the betting odds for each sportsbook before placing your bet.

If you are planning to make your first bet of the 2017 NFL season, and you need some guidance on how to make a bet, we strongly suggest browsing through our sports betting in Canada article to help you with everything you need from reading a betting line to understanding the winning potential of each betting market. With Week 12 of the NFL league on the horizon, take our predictions and place a winning bet on your favourite team.