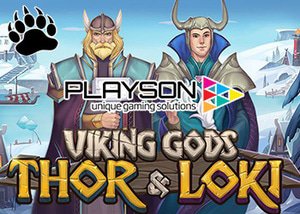 An exciting new slot has arrived at all Playson casinos. It's called Viking Gods: Thor & Loki and its set in a winter town of the great north, where myth and mystery come together to deliver something magical.

In the new Viking Gods: Thor & Loki slot, players are invited to journey to a strange land where Thor, the God of Thunder and his mischievous half-brother, Loki, have hidden a treasure trove gems, ornaments, jewels and mythical creatures for entertaining spins across 5x3 reels for big wins.

Designed and developed on the Playson omni-channel HTML5 platform, the new Viking Gods: Thor & Loki slot features a selection of bonus features which make winning all the more entertaining:

Adam Daniels, Managing Director at Playson, couldn't contain his excitement and had the following to say about the new Viking Gods: Thor & Loki slot:

"Our initial game testing shows that players really have responded very well to the indulging game play. At the end of the day, we're about giving players an enjoyable experience for their gaming spend, and I'm convinced Viking Gods does just that".

If you're looking for an online casino where Viking Gods: Thor & Loki slot can be played 24/7, then we recommend that you visit Slots Millions today!