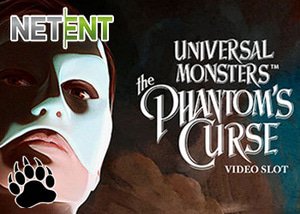 Get ready to indulge in a wide variety of thrills and chills from the new Universal Monsters™: The Phantom's Curse video slot from NetEnt Casinos.

The new Universal Monsters™: The Phantom's Curse video slot is based on the Phantom of the Opera hit musical and provides tons of captivating features, spectacular payouts, and plenty of reel spinning action to keep players entertained. The slot is powered by NetEnt casino software and offers the opportunity to enjoy the game on both desktop and mobile devices. With stunning graphics, smooth gameplay functionality, and superb winning potential, this video slot is certainly worth a spin or two.

The Universal Monsters: The Phantom's Curse online video slot is portrayed on 5 musical reels and 40 fixed paylines. The game boasts payouts in both ways and players can start the spinning action with a mere $0.20 per spin. The maximum you can bet in the game is $200 per spin, ensuring the game appeals to all players, regardless of their pocket size.

The overall visual presentation and layout of the game are phenomenal, allowing players to spin the reels inside an opera house. The reel set has been decorated with thematic symbols, including pearls, knives, rings, yellow roses, and high-paying characters such as the Phantom and Christine taken from the hit musical. With simplistic betting options, marvellous payouts, and thrilling bonus features, the Universal Monsters™: The Phantom's Curse video slot is sure to be a massive hit among slot enthusiasts.

This incredible video slot from NetEnt also comes equipped with an innovative bonus feature that is triggered by displaying stacked phantom symbols on reel 1 along with stacked Christine symbols on reel 5. This will unlock a Pick and Click feature, allowing players to choose between a mirror and a rose. If players manage to pick the correct object, they could win a staggering amount of up to 7,200 coins. The game also has a re-spin feature that can provide sticky and stacked wild symbols for even bigger payouts of up to 160,000 coins.

Where to Play Universal Monsters™: The Phantom's Curse Slot

NetEnt has done a spectacular job in providing players with uniqueness and pure creativity. If you liked the musical, you are going to fall in love with this video slot. This slot can be played at Slots Magic Casino for extraordinary online gaming experience. New players will receive a 100% up to $150 on their first deposit, which can be used to explore a variety of games in the casinos's registry.