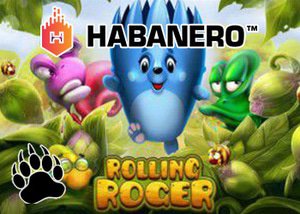 Online Players! Get ready to roll and be one with nature in Habaneros masterpiece titled Rolling Roger slot.

This month Habanero, the premier provider of table games and slots, provides fans the opportunity to hedge their bets with Rolling Roger as he appears on the 5 x 3 stage to invite players on an adventure alongside his woodland pals.

Roger's roll over high paying character symbols reward an acorn and by collecting forty acorns, the appearance of three or more scatters can activate the free games bonus round. Every spin sees Rolling Roger roll from three up to fifteen positions including the position occupied at the start, and the bouncy blue character never rolls over the same position twice. If Roger rolls over a wild symbol, all symbols counts are increased by 1 including the symbols still to be collected. The wild substitutes for all others apart from the scatter.

If Roger rolls over one of his colourful pals in the base game the acorn counter increases by one and up to a maximum of 120 acorns can be collected. Once the rolling action of Roger ends he drops to the bottom and all combinations pay according to the paytable. By collecting more than six symbols, 6x payouts are awarded for every extra symbol and the highest reward is dished out by the wild. Scatter symbols only appear when at least forty acorns have been collected and will not be seen during the free games bonus round.

Once the acorns transform into free games high card symbols 10, J, Q, K and A can turn randomly wild at a cost of five acorns whenever Roger performs his magical roll over them. The Rolling Roger bonus feature only ends once all acorns have been traded for marvellous woodlands prizes.

Sharing his excitement in a press release, Toni Karapetrov, Habanero's Head of Corporate Communications comment that it's the whimsical audio combined with top quality graphics that pack a punch, and he feels that the new Rolling Roger slot is one of their best releases to date. Karapetrov said he knows that the storyline of Roger and his woodland pals combined with top-of-the-line HTML5 development will leave fans fully absorbed in the quest for acorns.

Join Roger and his woodland pals and go on the adventure of a lifetime at any one of the Habanero Casinos, including BitStarz. Rolling Roger slot is the latest addition to Habanero's collection of HTML 5 masterworks and currently, games can be enjoyed at over sixty aggregators and operators and are available in over twenty-one languages. Games created on Habanero's platform are tailored to enable play on the widest variety of devices and acquired in 2012 by European investors the developer now boasts a host of skilled mathematicians, experienced developers, and talented designers.