The Aliens Have Landed In New Reptoids Slot From Yggdrasil 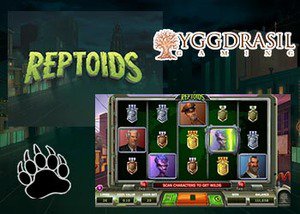 Nothing is as it seems in the new Reptoids slot from Yggdrasil. Aliens have taken control of the reels by exposing top positions and will stop at nothing until they've taken over the world. The only way to stop them is to spin the reels for big wins!

The new Reptoids slot arrives at Yggdrasil casinos today and is hands down the alien invasion themed slots we've all been waiting for. Central to the theme is 1960s-inspired artwork which tells an alarming tale of aliens trying to take over the world. They've already infiltrated the government and now want to come for you. Stop them in their tracks and you could be rewarded with a maximum jackpot of up to 500,000 coins.

The Reptoids slot is a 5 reel and 20 payline video slot which brings to life one of the 20th century's most popular themes: an alien invasion. The slot is beautifully rendered in vintage graphics to create a 1960s look and feel, while symbols of reptoids disguised as humans adorn the reels. These symbols include a nurse, cop, general, reporter, scientist, and reptoids president.

Fittingly, the president is the highest value symbol and could pay out 50x your stake when five of them appear adjacent across the reels. Also keep an eye out for the gold coin scatter ꟷ 2, 3, 4 or 5 of them across a single payline could pay out a massive 10x-5000x your original stake.

One of the key features is the Repto Detector - a device that randomly scans the reels for aliens during the base game. The symbol that lands inside the detector frame will be turned into a wild along will all other identical symbols. However, if the gold coin scatter symbol lands in the detector frame, you will trigger the free spins feature along with 7 free spins. Furthermore, if you detect two reptoids during the feature, you'll receive 2 additional spins.

According to Yggdrasil Gaming, the new Reptoids slot will offer a return to player (RTP) of 96.1% and will be available across multiple platforms, including iOS and Android mobile devices. Players will also be able to watch replays of winning spins and share these with their friends by using the BRAG™ tool.

Overall, the new Reptoids slot is an excellent addition to the Yggdrasil Gaming portfolio. The theme alone will keep players at the edge of their seats, while quality special features make for richly rewarding spins. The game can be played at Tropezia Palace Casino, where first-time players receive a 100% match up to $100 on their first deposit. The online casino is licensed and regulated and delivers safe and fair games to thousands of daily customers.