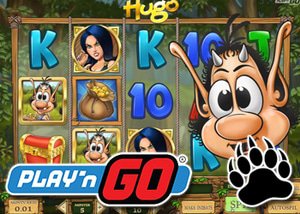 Play N' Go have announced in a press release that they will be releasing a new video slot titled Hugo later this year.

Play N' Go is a Swedish software developer specializing in online casino games. They have been in operation since 1997 and are one of the biggest players in the online gambling industry. Their games come with great themes but where they are making big waves is in the mobile gambling industry. Their games are mobile compatible and come packed with great features such as free spins, wilds, multipliers, and more.

In their latest press release, Play N' Go have stated that they will be releasing a new video slot titled "Hugo" later this year. This game is based around the Danish troll named Hugo who also has his own animated TV show that is very popular with Scandinavian viewers. The show is aired in more than forty countries and is popular with viewers around the globe.

Martin Zettergren, CEO of Play'n Go said, "We are extremely excited to work on Hugo - a character that many around the world grew up with and remember fondly. We can't wait to bring Hugo and friends to the world of premium slots, and I'm certain that the agreement with Hugo Games A/S and Royal Casino will bear fruit for all parties."

The Swedish developer isn't giving too much away about the new slots game but they said that it will be based on the same character as the TV show. We have also learned that it will have 5 reels and 10 paylines. The game will be available to play on desktop and mobile and if it is anything like its predecessors Wild Blood or Tower Quest, it is sure to be a big hit.

Going on the history of Play N' Go slots, we can expect that the Hugo slot will have a RTP percentage of at least 96%. We are also hoping to see a jackpot payout of 30,000 coins or more. Feature wise we expect to see plenty of in-play bonus rounds such as wilds, expanding wilds, free spins, and a gamble feature. The biggest wins will be found in the bonus games and we expect that bonus rounds will be triggered by three or more scatter symbols.

The gamble feature if included will give players the chance to double or quadruple their wins. This is usually done by choosing the colour of cards for doubling and the suit for quadrupling. We are also expecting that this new Play N' Go slot Hugo will be made available for all budgets with bets per spin starting at as low as $0.01.

The Hugo slot is expected to be released in the third quarter of 2016 so we really don't have all that long to wait to see what this new Play N'Go slot will bring. In the meantime, while you are waiting, why not play some of the great free Play N'Go slots available right here on our website.