Get in the Groove for Aristocrat Casinos New Madonna Slot 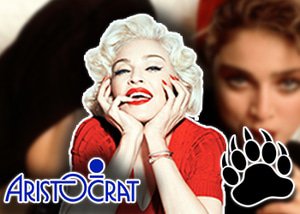 Aristocrat Technologies announced that they have entered into a licensing agreement that will see the developer release a video slot on Madonna.

The licensing agreement is a multi-game deal with the first of those to be unveiled at this year's Global Gaming Expo. Las Vegas is the city hosting this year's Global Gaming Expo and at this stage, little about the game has been released. The new Madonna slot is expected however to include multiple soundtracks from Madonna's recording career, and of course, will predominately feature the music legend on its reels and bonus games.

Madonna began her music career in the early 80's with the song "Holiday". To date, she is a Grammy award-winning artist and an inductee into the Rock and Roll Hall of Fame. In total, the star has an impressive 57 hits that have made the charts. This includes 38 Top 10 singles and, as an artist, she lays claim to being the highest grossing touring female artist in the history of Billboard Boxscore.

The Managing Director of Aristocrat, Matt Wilson stated: "Aristocrat aggressively pursues the absolute best and most iconic brands to inspire us to create games that help our operator partners give their players the most engaging and entertaining experience possible. There is no bigger name in the history of pop music than Madonna, and we are thrilled to welcome the brand into Aristocrat's enviable family of licensed product."

In addition to Matt's comments, Aristocrat's Chief Product Officer, Rich Schneider stated: "We have been diligently working for months to create a slot game that perfectly encapsulates the essence of the Madonna brand, while also bringing an entertaining experience to players fueled by her landmark and groundbreaking music, coupled with video and exciting gameplay. We are excited to premiere the new Madonna Slot Game at G2E."

Slots Magic Casino is one of many Aristocrat casinos online that feature games powered by Aristocrat. As an established online casino, they understand the meaning behind providing a balanced, exciting atmosphere that features the best in casino game action. They include same day cashouts and welcome new players with a 100% match bonus up to $100 and complement that with 15 free spins on a popular NetEnt video slot. New players will enjoy free spins for a year when making an initial deposit of $50 or more. Register today and experience a new way to play!