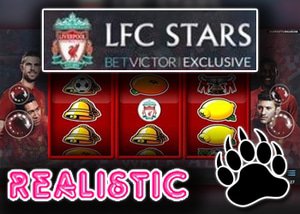 Exclusive to BetVictor, the principle Premier League club partner, the game provides players with the opportunity to gain ten free spins while the jackpot prize offers 250 times the triggering stake. The new title created by Realistic Games is its latest exclusive slot designed for BetVictor and follows previous releases such as The Million Pound Goal and Liverpool FC Football Slot, launched as part of the operators Euro 2016 campaign.

BetVictor, COO, Paul Louis shared that the success of The Million Pound Goal as well at the Liverpool FC Football slot they are delighted to partner once again with Realistic Games casinos to provide members with a unique game featuring the most successful football clubs in the world. Louis feels that whether online players are a fan of Liverpool or not, the truly engaging game is bound to appeal to a wide player audience around the globe. BetVictor is aware of Realistic Games high-quality content already and finds it a pleasure to work alongside the award-winning software provider once again.

Andy Harris, Realistic Games, CEO, shared how incredibly happy the developer is to team up again with BetVictor, creating a highly entertaining slot inspired by the team winning the European Cup five times. The LFC Stars is the perfect slot to kick-start the new season after the summer offered little football action and everyone is eager for the new Premier League to get underway. Realistic Games partnered with BetVictor in June 2014 to release mini game versions of roulette and blackjack, and again in 2015 to launch its exclusive club branded Chelsea FC slot.

A great selection of bonus features enhance play, and Jürgen Klopp's Boom represents the wild, while Liverpool legends, Ian Rush, Michael Owen and Robbie Fowler is part of the show reel bonus round. The super game function costs ten times the standard stake and gives access to five linked spins during which the show reel scatters transforms to a wild and once it freezes into position triggering the bonus round activates easier. The new Liverpool FC slot appeals to all sports fans with an RTP of 95.51% and a jackpot worth 5,000 coins.