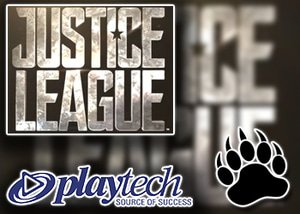 World leading internet casino software provider Playtech has just announced a series of new video slots after a deal with DC comics. First up is a new Justice League slot.

Online software developer Playtech and Warner Bros. Consumer Products have teamed up for an exclusive DC branded film and TV content deal. This will see fans of Playtech Casinos getting some great new video slots, the first of which will be a new Justice League slot coming in November 2017.

We don't have too many details on the specifics of the new Justice League slot just yet, but we do have a sneak peek preview in the video below. This YouTube video shows the different games that Playtech and Warner Bros will be collaborating on. Justice League will be based on the upcoming movie featuring Batman, Superman, Wonder Woman, and Aqua Man. The film is set for release on the 17th of November and it is expected that the new Justice League slot will be released to Playtech casinos on the same day.

Playtech has been producing excellent superhero slots since 2010 and the one thing that really stood out with their Marvel slots were the progressive jackpots. Casino players will now have the same massive jackpot opportunities in the new progressive jackpot network that Playtech are creating called the DC Super Heroes Jackpot.

It was February 2016, when Playtech got their first Warner Bros deal for the rights to produce DC themed slots based on the Batman TV series. Just a year later, the software developer signed their largest every multi-year, exclusive licensing deal which will see them license and develop an extensive catalog of DC branded film and television properties based on Warner Bros and we can expect to see titles like Suicide Squad, Dawn of Justice and of course the new Justice League slot to hit Playtech casinos in the near future.

Check out the video preview below.

To get you ready for the release of the new Justice League slot coming in November we have an exclusive real money bonus for all Canadian players. Slots Heaven is one of the top Playtech Casinos and they offer all new players a 200% match bonus up to $400. Grizzly Gambling has however secured an exclusive Slots Heaven bonus that will see all our readers getting an additional $25 free bonus on top of the welcome offer. All you have to do is use our link and sign up for a real player account. Make your first deposit and claim the welcome bonus plus an extra $25 free. There is no promo code and the money will be added to your account instantly.

As with all bonus offers, there are wagering requirements and terms and conditions but you will be happy to know that all the casino games count towards your wagering requirements. The casino is also available on mobile, desktop, and tablet devices and there are plenty of great promotions on offer for returning players too. You'll find free spins, reload bonuses, cash back offers, exclusive giveaways and so much more. Just visit the promotions page to view the full list. Play the best Playtech slots and be ready to spin the reels on the new Justice League slot when it releases next month.