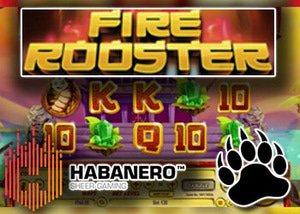 Highly reputable designer and provider of iGaming titles, Habanero enters the Chinese New Year with a bang since the announcement of the release of their latest sensational slot - Fire Rooster.

Just in time for the Chinese New Year festivities, this extraordinary slot is themed on a Chinese legend identified as "The Rooster's Lament". This outstanding game from Habanero hit the gaming platforms on January 28, 2017. Announcing the game's launch, Daniel Long, Habanero Head of Sales stated the following, "Fire Rooster is an explosive game with stunning high-definition graphics and an immersive soundtrack; it is a fun theme, and as we expand into new markets, will offer our partners universal appeal."

Featuring 5 reels, this celebrated slot reveals the story of a rooster that lost his crown during a dispute amongst a centipede and a dragon. Help the rooster to gain back what is legally his, by spinning the reels. Furthermore, collect fascinating rewards in your quest. The game from all accounts stands out to be a magnificent slot characterised with spectacular high-definition graphics as well as a striking soundtrack. If you are in pursuit of some top-notch entertainment where you can discover generous rewards then look no further. The slot boasts with fascinating attributes that will keep you amused till the last spin. Encounter some fantastically designed images on the reels that include precious gems, two roster icons, a dragon and the standard card symbols 10-A. The game's wild icon is depicted by the Rooster with a crown which can all symbols on the reels to create a winning sequence. The Scatters icon is represented by the Angry Rooster and it triggers the free spin when three of them are fixed anywhere on the reels. The amount of scatters icons used to set off this attribute will establish if punters can collect between 8 and 18 extra spins. The Roster Icon can explode at random in the course of the Free Spins attribute, creating an opportunity for expanding Wilds which can reward you with more profitable sequences.

Join in the festivities and have a jolly time by testing out your gaming skills by giving this game a free spin at Club Gold Casino. No download or registration is required. Club Gold casino is a distinguished gambling destination operated by Habanero Systems. New players benefit from a bonus pack valued at up to $2,250. To activate the complementary cash, simply enter the corresponding code in the appropriate field on the cashier page.