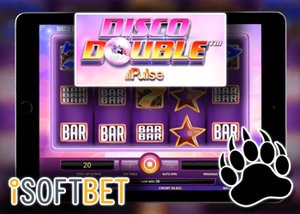 Get your dancing shoes ready to party with the new Disco Double slot coming to all iSoftbet casinos very soon.

Casino games developer iSoftbet is inviting players to show off their dancing skills as they launch their latest video slot. The new Disco Double slot is set to be a massive hit with music fans and comes with 5 reels and 20 paylines that will have you spinning and dancing to the beats at the same time. This slot can be played on mobile and desktop and comes with a 95.11% RTP.

Michael Probert, Head of Business Development for iSoftbet said, "Disco Double is a bold and vibrant slot, offering players engaging gameplay. Under the hood, Disco Double is powered by smart math and fine-tuned mechanics, making it a fun and immersive slot to play."

The new Disco Double slot is a 70's themed game so think platform shoes and fantastic disco music and you'll have an idea of what this new game is going to bring. There are plenty of features included in this slot machine too that will bring back all those memories of big hair, flared pants, and strutting your stuff on the dance floor.

The Disco Double symbol triggers a free spins bonus round where players are rewarded with 10 free games. During the free spins bonus round there is also a chance to trigger the Glitter Ball multiplier on reel three. When this happens all your winning spins will be doubled thanks to this great multiplier feature. That's not all, there is also a massive jackpot up for grabs which is a whopping 10,000x your wager. To hit this all you have to do is get 5 wild symbols across the reels.

Check out the preview video of the new Disco Double slot below:

There are plenty of great iSoftbet casinos out there, but we recommend Sports Interaction casino for our Canadian readers. Right now when you sign up for a new player account you can claim the Sports Interaction casino bonus which is 100% up to $100 with low wagering requirements of just 30x. There are plenty of other excellent player promotions at this online casino too including a 100% cash bonus every Monday in the Monday Mania promo. Just use the bonus code MONDAY100. There are lots of midweek bonus deals too including the Midweek Bonus Bump where players can get a 25% bonus every Wednesday and Thursday.

Sports Interaction Casino also has a great loyalty program, four levels deep which gets you monthly reload bonuses as well as higher comp point conversion rates the higher you climb. Other promotional offers such as free spins and no deposit bonuses are also given and you can play on mobile and desktop so whether you have an iPhone, iPad, Android smartphone or tablet you can get in on all the action and test out the new Disco Double slot as well as plenty of other great iSoftbet slots.