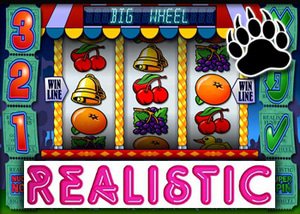 The new Big Wheel slot offers everything classic players prefer when it comes to uncomplicated play yet it reveals many bonus surprise features once the spinning action activates. The crazy-reel bonus is one of the main bonus boosters and could trigger randomly at the end of any spin while activating the big wheel feature is possible only when a big wheel symbol appear on the middle payline, which at the same time could award a win of up to 300 times your stake. What further attracts players to the winning big wheel created by Realistic Games is the jackpot titled the repeat chance bonus.

Andy Harris the CEO at Realistic Games shared that the developer is absolutely ecstatic with the release of Big Wheel slot, which is a game focused on supplying online players with all the thrills and spills they have been waiting for. The incredible line-up of special features provide all the winning excitement and Big Wheel slot now joins its already popular range of three reel slots which remains a popular choice for players across all platforms including mobile and desktop.

Realistic Games launched in 2002 and in 2011 started developing its in-house platform. With its incredibly popular gaming range enjoyed by online players the developer's gaming collection can now be found at some of the finest Realistic Games casinos such as Bet365. Bet365 Casino currently has well over five million members worldwide enjoying its poker rooms, bingo halls, sports betting, live dealer casino games and mobile gaming library. The casino is renowned as one of the most and one of the biggest names in the online gambling industry, regulated and licensed in Gibraltar. What contributed to the casino's immense success is its high sporting payout percentages appraised by TST.

Realistic Games have also recently released Crystal Clear video slot featuring 10 paylines, a 1,000-coin jackpot and increasing wilds. Each new game starts with eight wilds on each reel, once a win is obtained, all non-wild symbols part of the winning combination are transformed into wilds. More winning opportunity is then created via the free re-spin that follows and while more wilds are added the free re-spin action continues until one of two actions takes place, either the jackpot is triggered or no wins are achieved within a spin.