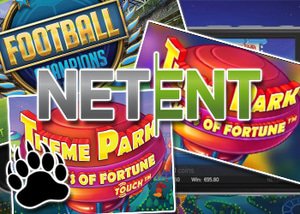 NetEnt have just released the first footage for their next big slots title for 2016, Theme Park: tickets of Fortune. This game is scheduled for release in June and looks set to be another big hit.

New NetEnt slots for 2016 just keep coming and Theme Park: Tickets of Fortune is the last game in their release schedule for the second quarter of the year. The name is a little long but from what we have heard, players are in for a thrilling ride. June might seem like a long way off but NetEnt have done what they always do and released a sneak peek video that you can view at the end of this post.

Many of us did our best to try and guess what this new NetEnt slot was going to be about. We thought of rollercoasters and the likes but now that we have seen the trailer and the game in action, it is quite clear that this title is going to be based on classic fairground attractions. This means that players can expect to find coconuts, strength tests, shooting games, and more. It promises to be an action packed slot with 5 reels and 50 paylines. The graphics are bright and there is a fairground style soundtrack to really put you in the mood.

Theme Park: Tickets to Fortune is packed with unique features and there are plenty of fantastic bonus elements to keep you entertained. The claw feature inspired by "prize grab" games is excellent and when a claw symbols appears during a normal spin it expands and then reaches off the screen to grab a prize that is immediately converted into coins.

Stacked wilds also feature and wild symbols for this NetEnt slots game are rollercoaster carts. Because they are stacked they fill whole reels and with 50 paylines these can help you to get some huge wins. Just get two or three in a single spin and you are in for a real treat.

If you get three golden ticket scatter symbols you trigger the wheel of fortune bonus round. In this game players get to spin the wheel to win some tickets that can then be used on one or more of the six bonus games that are included in this slot machine.

There are 6 bonus games in Theme Park: Tickets to Fortune. They are all based on different fairground games and you use the tickets won on the wheel of fortune to play them. Bonus games include Duck Shoot, Hook-a-Fish, Sledge Hammer Strength Test, Skee Ball, Punch Bag Boxing, and Topple the Cans. There are plenty of multipliers and loads of coins to be won in these bonus games and we have to admit, these are the most exciting things we have seen so far in new NetEnt slots for 2016.

The game is scheduled for release on the 22nd of June and you can check out the trailer below to see just what you can expect.