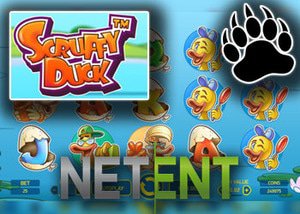 NetEnt's latest released, Scruffy Duck video slot will be available at all online casinos part of their network from the 8th of February 2017.

Scruffy Duck features a fascinating twist to the ugly duckling tale and kicks of 2017 with cheerful buoyant ducks and a rhythmic soundtrack while the NetEnt video slot is loaded with remarkable bonus features. Can't wait until February? Members at LeoVegas Casino can enjoy a quacking good time RIGHT NOW because the casino holds exclusive rights until the official launch date.

The new Scruffy Duck slot is a 5-reel, 25-payline non-progressive with a top win of 300,000 coins while offering an impressively high RTP of 96.6%. Players get to enjoy an array of bonus wins boosted by five dissimilar free spins feature rounds, colossal wilds, random wilds, a double feature, multipliers and also expanding wilds. Symbols comprise of high card symbols showed in fractured eggshells and players get to meet the main characters, which include serious mobile duck, friendly duck offering gifts, super cool music duck, sweet adorable baby duckling and the king of the ducks. The highest reward is the serious businessman duck talking on his mobile. Once five of them line up on a single payline, a reward of 400 coins is added to your bankroll whether play took place on a desktop, Mac, tablets, iPhones, iPads, and Android mobiles.

The crowned duck turns wild and expands during the base game and even during the free spins round to improve wild substituted winnings, the wild are unable to replace the scattered free spins logo. At least 3 of the free spin logos are necessary to unlock the free spins bonus round, which awards once of 5 free spins bonus features, each presenting unique rewards, to conclude which of the five rewards are awarded one the five ducks displayed in a pond needs to be collected.

The first free spins feature on the new Scruffy Duck slot from NetEnt offers 3x multipliers and 15 free spins, the second awards 12 free spins and upsurge winnings by the removal feature making lower symbols disappear. The third bonus awards 10 free spins, while the winning booster is represented colossal wilds, which, appear only on the 2nd, 3rd, and 4th reels. The fourth feature awards 8 free spins with wins boosted by up to five randomly placed wild symbols, while the fifth awards only 6 free spins plus two of the features already mentioned.

Those who play at LeoVegas Casino can look forward to some great action and phenomenal winnings. While the game is exclusive to the casino at the moment, its members can also take advantage of the regularly triggered free spins bonus. LeoVegas Casino in one that impresses and even though it has not been around for the same periods as several of its rivals the casino is already known as the king of mobile.

When it comes to withdrawing and depositing we can recommend playing the new Scruffy Duck slot at the casino due to its wide variety of banking methods that not only caters for players from Canada but also guarantees only the safest options. As part of the family of NetEnt Casinos, LeoVegas offers a wide selection of games from several top software providers including Bally Techniques, Quickspin, WMS, Yggdrasil Gaming and more!