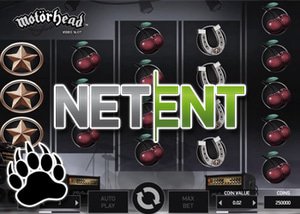 The official preview for the NetEnt Motorhead slot machine has been released. This slots game completed the Rocks Trilogy.

About The NetEnt Motorhead Slot Machine

This video slot is heavy metal themed. It is the third rock video slot and features "Rock Out", one of the bands big tunes. This new online slot will be a tribute to the rock band and Ian "Lemmy" Kilmister.

Simon Hammon, Chief Product Officer for NetEnt has this to say:

"We are thrilled to be working with an iconic brand such as Motörhead through our collaboration with Global Merchandising Services. Motörhead will form a great addition to our 'NetEnt Rocks' series of games. We will make a game the band will be proud of by creating a fast paced slot machine that is in tune with the energy and passion of the music."

Motorhead was legendary for their hell-raising behaviour, combustible inter-band relationships, and high-octane live shows. They were also one of the loudest bands on the planet and their career spanned 40 years. Lemmy passed away in December last year following a short battle with cancer and the rest of the band decided to call it a day. With the release of the NetEnt Motorhead slot machine, NetEnt has the opportunity to create a lasting tribute to Lemmy.

We are sure that heavy metal lovers will enjoy this new NetEnt slots game and you can check out the official preview at the end of this article.

Once the Motorhead slot is released, the NetEnt Rocks Trilogy will be complete. For now, players can enjoy the Guns N' Roses slot and the Jimi Hendrix slot at all NetEnt casinos. These slots games will have you spinning and singing along to the great soundtracks they feature.

The first in this trilogy, Guns N' Roses was released in early 2016 and you can read our full Guns N' Roses slot review and try this game for free right here on our site. This game was designed to celebrate the bands 30th anniversary. It features plenty of bonuses and special features and is one of the most popular slots games this year. There is a "Crowd Pleaser" bonus game, an "Encore" free spins round, and the "Appetite for Destruction" wild symbol that helps players win large sums of money. The addition of officially licensed Guns N' Roses tracks really does make this slot machine.

The second in the NetEnt Rocks trilogy is the Jimi Hendrix slot and this includes songs from the guitarist's back catalogue, including "Purple Haze", "Foxy Lady", and "Crosstown Traffic". This slots title is available in 3D and the main character has hundreds of unique animations and facial expressions. It features bonus rounds, free spins, wilds, scatters and more.

Motorhead: Louder Than Anything Else will be released this autumn to complete the trilogy and it is likely to contain audio content from the band famous for hits such as "Ace of Spades", "Overkill" and "Iron Fist." Be sure to check out the NetEnt Motorhead slot machine preview below for more information.