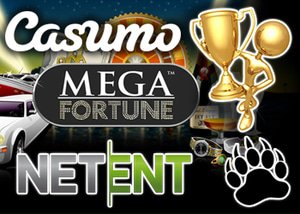 The winner David, from Sweden hit the jackpot just 1 hour after signing up for a real money account at Casumo. He was playing the Mega Fortune slot for the first time using the mobile casino app when he entered the bonus round with a €1.25 spin. He said, "The bonus reel was spinning and I suddenly saw a lot of numbers flashing up. I felt a shiver down my spine and just felt that something incredible was happening." This was confirmed when he won a massive €2,971,469.49.

In an interview he explained how his win came about: "I was at home with my girlfriend doing nothing special. A few weeks before this a friend of mine had told me how he had won a little money playing online casino games and we thought, what the heck, why not?"

"We had absolutely no clue what was going on or how the bonus wheel worked. Then it finally stopped and on the screen we saw a bunch of numbers ticket. It was so unreal.

He explained that a quick mobile search brought him to Casumo, where they registered and just started clicking around. They chose to play Mega Fortune on a whim. He said that they took turns pressing the spin button but the balance went down quickly. They decided that they would keep paying till it hit zero and then they would stop. The bonus round was triggered when their balance was at €9.

He said, "We had absolutely no clue what was going on or how the bonus wheel worked. Then it finally stopped and on the screen we saw a bunch of numbers ticket. It was so unreal. We just couldn't understand if we'd won or how much, so I took a screenshot and sent it to my friend."

David's friend assumed they had been playing free slots games and figured the winnings were just a demo until David explained they had registered and deposited money. His friend immediately let him know that he had won the jackpot and it was €2.9 million.

When David was asked how this win will change his life, he said that his family had been going through a rough patch for a while and not being forced to think of every penny when it comes to expenses will be a massive relief. At the moment he plans to buy a bigger house and he said he will also share some of the money with his immediate family.

David has become the latest player to win a life changing sum of money at a NetEnt casino. In May another lucky player from London won €2.9 million playing Mega Fortune Dreams at LeoVegas casino and he did this with a wager of just £20. This is however, the biggest win on the Casumo mobile casino to date, and the second biggest in their history.

According to Simon Hammon, chief product officer at NetEnt, they are always delighted to see users win big on their slots games and they wished to extend their congratulations to their latest winner.

Hammon also went on to say, "NetEnt slots are designed to deliver market-leading entertainment to all those who play, and it is fantastic to see our players win life-changing sums of money doing what they love."

This big win is not the first for Casumo either, and earlier this year in January, a UK based player won almost €2.7 million also playing the Mega Fortune slots game.