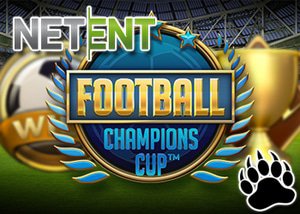 If you're a football fan and lack the patience to wait until the June start of the European Championship 2016 in France, here's some great news!

Net Ent are rolling out a brand new online Soccer game on May 23, 2016 called Football: Champions Cup, more than 2 weeks before this classic European Tournament. Get ready to get a jump start and pick up some great prizes along the way to this European Extravaganza!

Now Play The Beautiful Game Online From The Comfort Of Home!

Amongst Soccer fans or Football fans as they are more commonly called in Europe and South America, this legendary match-up is known as the Beautiful Game. Now is the chance to see what all the fuss is about with NetEnt's Football: Champions Cup, as Football Fever gets ready to grip millions around the world.

Inspired by this upcoming Football Tournament that happens only once every 4 years, this new NetEnt slots will be available to play across mobile and tablet devices as well as on standard desktops. In the base game randomly overlay Wilds are featured with a maximum of five of these Wilds added to the reels.

There are 2 bonus features to enjoy including a Penalty Shootout Bonus feature, just like in the live games. Here the aim is to score a goal from the "Penalty Spot" and save the opponents Penalty kick from entering the goal.

For every goal scored from the Penalty Spot, players receive a prize and every Penalty saved returns a Multiplier. There is a Free Spin Feature which starts with 6 Free Spins, and as you progress through the rounds an additional 6 Free Spins are awarded. Win the Cup and receive 500 x your stake, this on top of all Free Spin winnings!

Play at least 20 rounds of Football: Champions Cup and now receive raffle tickets for some very exciting Football-themed prizes. Players can earn multiple tickets up to a maximum of 50, offering chances to collect football memorabilia signed by some of the game's legends, beer dispensers for armchair fans, and gaming chairs along with other casino bonuses, added to the mix.

Winners will be announced on July 11 2016, and the top prize is an unprecedented once in a lifetime chance to watch three top level Football teams play in three different countries all in Europe in an amazing whirlwind 7 day period that is bound to take your breath away. Visit Casino 777 and be sure you're ready for the action, as they say, "you ain't seen nothing yet!