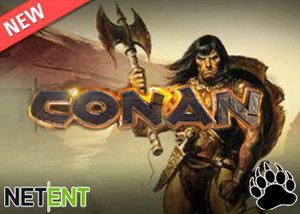 NetEnt will soon introduce an exhilarating new character to their line-up of slots after acquiring the rights to create their own slot adaptation of Conan.

World-renowned software developer, NetEnt, will be offering slot enthusiasts a new character to enjoy thanks to their recent deal where they managed to secure the rights to create a Conan slot adaptation. Conan the Barbarian, also referred to as Conan the Cimmerian, is a mythical hero who was initially established in pulp fiction magazines. Since then, he has been adapted to comics, books, several movies, including Conan the Destroyer and Conan the Barbarian, television programs, both live-action and cartoon, role-playing games, video games, and now in the form of an online slot from NetEnt.

The new Conan slot developed by Netent casino software will feature a sword and sorcery theme, creating a phenomenal branded title that slot enthusiasts will be excited to play. The new Conan slot should also feature a 5x3 reel structure with a medium volatility level. However, we are still waiting to see what bonus features and symbols will be included in the new branded slot from NetEnt.

NetEnt is certainly no stranger to branded slots as they have been creating content based on film, television, and music brands for years, including slot titles like Planet of the Apes, Vikings, Jumanji, Guns n Roses, Narcos, Jimi Hendrix, and Motorhead. Each of these branded slot titles has been immensely popular among slot enthusiasts around the world which means the new Conan slot will be well-received by players as well.

The new Conan slot will undoubtedly boost the branded slot portfolio that NetEnt currently offers, ensuring that players stay glued to their screens with every spin they initiate. The slot will be available on desktop, mobile, and tablet devices and should feature an impressive range of payouts with remarkable graphics, incredible animation quality, and truly impressive sound effects.

"Conan is a beloved character and brand that has a strong history along with legions of adoring fans from across the globe. We are honored that we have the opportunity to create our own Conan adaptation and can't wait to give this character the hallmark treatment he deserves at NetEnt," stated Bryan Upton who is the Director of Games at the world-renowned software provider.

The new Conan slot is only the beginning of branded slots from NetEnt in 2019 as the company recently announced that they also struck a new partnership with the Prince of Darkness, Ozzy Osbourne. They will work together going forward to create a new branded slot that will feature the legendary rock vocalist which is sure to be another hit among slot enthusiasts as well.

Where to play the new Conan Slot

The new Conan slot should be released at all NetEnt casinos within the next few weeks, giving players the opportunity to travel to the Hyborian Age which occurred after Atlantis was destroyed and before any ancient civilization was on the rise. Licensed operators such as Bet365 online casino will offer the game to their players for a chance to join the mythical hero on the reels.