Football: Champions Cup™ Slot From NetEnt Releasing in May 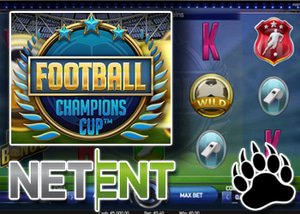 NetEnt have just announced that their next slots game is going to be all about football. Football: Champions Cup™ will be released the end of May, just in time for EUFA Euro 2016 and we can't wait.

NetEnt slots always deliver and we have no doubt that this football themed slots game will do just that and more. The 15th edition of the EUFA European Championship will be held in France from the 10th of June to the 10th of July 2016 and to celebrate and get players in the mood, NetEnt are releasing Football: Champions Cup™

This NetEnt slot has been inspired by the upcoming football championship and players will be able to choose the flag of their country before entering the main game. The atmosphere of the game is typical of that of a full stadium to help you feel like you are part of the action. The European Championship will be part of the game and be used in the free spins bonus round. There is also a free spins tournament that is awarded when a player gets three free spins symbols on the five reels. Players who get this will see the countries displayed in their screen with three cups in the middle. These cups will then be awarded during the free spins tournament and also includes a home wild, and an away wild. There will be quarter finals, semi-finals, and a final as well.

More exciting football action is available in the main game thanks to the overlay wild. There is also a shootout bonus game that is triggered when players get three bonus symbols. During the bonus game players have to pick a spot to score and if the penalty kick scores, a big wins comes you way.

From the 23rd of May, players will be able to take part in a real football tournament. With Football: Champions Cup™ players get to pick their own team to play with and become part of the game. NetEnt will also be running a special promotion specifically for this new slots game. Players can join a special summer fest where every goal will matter. This is going to be a whole month packed with 5 football stages, 7 different promotions, and lots of fantastic giveaways. Be sure to keep an eye on our site for more information as the time draws closer and Football: Champions Cup™ get ready to launch along with a summer of amazing promotional offers and giveaways.