The Playtech New Open Platform - It's A Good Fit For Mr. Green Casino! 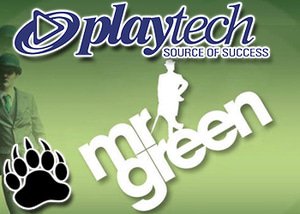 Rapidly expanding online casino brand Mr. Green has joined forces with the Playtech Open Platform (POP) and is due to go live with its rollout imminently.

Open Platform is a new powerful solution which as well as offering enhanced bonus tools also comes with other business intelligence capabilities. It allows all licensees a one-time integration that includes access to 600 plus premium and in-house branded Playtech titles and games all delivered from over 20 of their third-party suppliers, including such providers as Inspired, IGT and Scientific Games.

Joining The Ranks Of Ladbrokes, Gala Coral And Bet365

As part of the new Playtech and Mr. Green deal, the online casino will introduce a collection of games over the coming few weeks developed by Playtech for use both on desktop and mobile. This initial launch will include the best of the best performing premium mobile and desktop titles. This will enable them to offer their players best-of-breed content ahead of many online competitors. They will now join the ranks of other well-known casino brands of POP customers including Gala Coral, Bet365, Ladbrokes and Leo Vegas, and enhance their strong presence they already have in the UK.

Playtech COO Shimon Akad expressed his delight in Mr. Green joining what he called "the industry's most dynamic and accessible Open Platform." He acknowledged that the company are a rapidly growing casino brand and said they will benefit greatly by now having open access to their vast high performing portfolio. He went on to say his company have big plans for their platform and content in 2016 in line with their "omni-channel" approach, which they expect to cut across other expanding markets the likes of Scandinavia.

Although the online casino is not at this time available to players who live in Canada, CEO Bo Wänghammar acknowledged both companies have an ever expanding presence and said that they look to continue with their pronounced focus on both large and regulated markets. He said that both companies are an ideal match and that their collaboration on this new project for his company will be mutually beneficial setting Playtech games in the environment of Mr. Green's award-winning casino experience".

Playtech are a leading services and software provider and have over 130 license holders around the globe. These include many of the world's foremost land-based casinos and online mobile and retail operators. They also work hand in hand with government run lotteries, along with new emerging entities setting up operations in other recently regulated markets.