Win Sum Dim Sum - New Free Slots From Microgaming For Release In May! 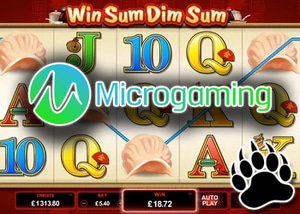 Microgaming are set to release a brand new slots game for May 2016 and one could almost call it a delectable delight with slot players being given plenty of chances to win on this hot new goodie with the title Win Sum Dim Sum.

Canadian casino players will no doubt indulge in this feast of slots activity played out over nine paylines and five reels, with an oriental theme serving up favorites from Chinese food culture, with lashings of fun on the menu for the hungry slots enthusiast.

The Action Gets Served Up In A Typical Chinese Restaurant

A place of comfort and oriental splendour the Win Sum Dim Sum game scene is set in an enchanting red colored Chinese restaurant adorned with its bamboo steamers and teapots, accompanied by its lotus rice, chicken feet, har gow and shao mai occupying a place of prominence alongside. Dim Sum is one of China's most popular dishes and now here's a game to match, that's bound to be equally well received!

Benefiting from the Bamboo Steamer expanding Wild symbol in the base game, players can activate the Free Spins Feature and marvel as the three middle reels expand, now giving 3 Wild reels. There are up to 30 Free Spins that can be won and the winning potential gets as hot as any Chinese kitchen, with a maximum payout on offer over 3,333 times a player's stake, on every Free Spin that they take.

The Free Spin feature occurs once you collect 3 or more of the Teapot Scatter symbols appearing anywhere in view, and now you're served up with a palatable 15 Free Spins. As in the base game the Wilds expand with 3 middle reels in addition to benefit from, and now is the chance to get 3 solitary Wild Reels all in one Free Spin, should it be your lucky day!

The Win Sum Dim Sum slot from Microgaming will be available on release as a cross-platform to Quickfire operators and casinos such as Gaming Club, who currently offer new players a Welcome bonus of 100% up to CAD $200 on their first deposit.

It will be introduced in 20 different languages suitable for desktop tablet and all mobile devices as from May 4, 2016, and Microgaming's Head of Product Channels Neill Whyte says that this May game release coincides with some trusted game features, in combination with a fun theme destined for global appeal.

He went on to add: "This game adds to our growing cross-platform offering whilst expanding our popular Asian-themed catalogue."