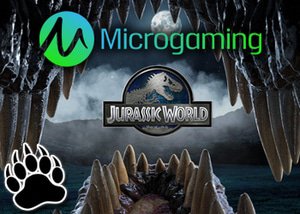 Following on from the great success of their latest dinosaur themed slots game, Microgaming have just put pen to paper and inked a licensing deal with Universal Brand Development.

With their finger firmly on the pulse, they have now agreed to develop a new free online slots game based on the bigtime blockbuster, Jurassic World movie.

The new game will follow closely in the footsteps of the Jurassic Park franchise deal that was previously announced back in January 2014, that culminated in huge success and popularity when the Jurassic Park online slot eventually went live in August 2014. The game had 243 different ways to win over five transparent reels, and Jurassic Park led all its players on an adventure unlike no other.

It had ground-breaking features in its base game mode, a knock-out T-Rex Alert Mode which triggers at random, 5 different Free Spin features, and a Multiplier feature paying out up to 6 x in Velociraptor and Brachiosaurus Free Spins Bonuses. Now Microgaming are about to give birth to yet another new animal, this time with Jurassic World!

Without question this new game will be hugely anticipated and it will be extremely intriguing to see how Universal and Microgaming manage to top or surpass such a fan favored slot game, with all its innovations with this new Jurassic World production.

Under this deal they will launch the new MGS slots game closely based on the latest movie, however no exact release date has been announced; just the fact that both parties have an agreement in place to bring what will undoubtedly be a hugely popular themed game into the realms of reality, without further ado.

The original movie upon which the game will be based on was released in June 2015, and it recorded the second largest worldwide opening weekend in movie history. It further went on to crack huge box office sales, with over $1.5 billion taken at the door for this production that was filmed on a $150 million mega Hollywood budget. Unsurprisingly that makes the movie the fourth highest grossing film of all time.

Microgaming will be looking to follow suit with Jurassic World slots, if record breaking movie titles are any indication as to how well this new creation will fair. Along with their creative flair and genius expect yet another impressive offering to add to their glowing, growing portfolio. They always manage to deliver, no doubt once again it will be done in spectacular fashion.