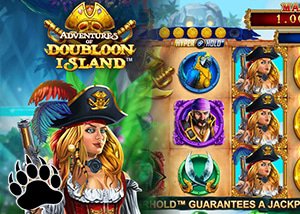 Transform yourself into a treasure-seeking pirate while playing the new Microgaming slot at Bet365 Casino, complete with scatters, wilds, a free spin feature, a HyperHold feature, and more.

The big blue ocean is filled with extraordinary islands where hidden treasures and untold riches await those that are adventurous enough to sail across the seas in search of lucrative rewards. The best way to plunder these islands is to become a formidable pirate with a crew that is just as determined to find treasure as you are. Well, you don't have to quit your day job to transform yourself into a pirate because Microgaming and Triple Edge Studios will bring the adventure to your doorstep with their newly released slot called Adventures of Doubloon Island. With cartoon graphics and plenty of loot to plunder, you'll stay on the edge of your seat with every spin you initiate.

The new Adventures of Doubloon Island slot from Triple Edge Studios and Microgaming casino software is propelled by a captivating reel structure that comes equipped with 5 reels, 3 rows, and 20 non-adjustable lines that will take care of all the big wins in the game. You will also benefit from a sensational variety of interesting bonus features, including scatter symbols, a HyperHold feature, wild symbols, a Free Spin feature, and a Win booster feature along with a top prize worth 3,333x your total stake. With that in mind, let's see how all these features come into play during your gaming session at Bet365 Casino.

The primary reason why online slot enthusiasts will play the new Adventures of Doubloon Island slot at Bet365 Casino is for the extraordinary selection of bonus features infused into the game. The female pirate holding a hand cannon will represent the wild symbol on the reel set, replacing all regular symbols to create additional winning opportunities except for the HyperHold symbols and the scatter symbols. The hand cannon wild symbol will be present on all reels and will produce a top prize worth 50x your stake when you land five hand cannon wild symbols in a single spin. You will also notice that the hand cannon wild symbol can appear stacked, further boosting your chances of winning big.

Once the HyperHold feature is successfully unlocked, you'll be transported to a new reel structure that will only feature gold coins, skull symbols, and blank symbol positions. You will also be rewarded with 3 respins while the gold coins or skull symbols that unlocked the feature will remain in place for the duration of the bonus round. Every time you display a new gold coin on the reels, the respins will reset, giving you additional opportunities to accumulate more gold coins. Each gold coin will also have a cash value attached to it that will be accumulated at the end of the HyperHold feature for an instant cash prize.

The gold coins and skull symbols can also reveal one of four progressive jackpots in the game that you can claim during the HyperHold feature. The Mini Jackpot will seed at $25.00, while the Minor Jackpot will seed at $100.00. You can also claim that Major Jackpot that seeds at $500.00, or the Mega Jackpot that seeds at $2,000.00. Alternatively, you can fill the entire reel set with gold coins or skull symbols to instantly claim the Mega Jackpot in the game.

The last bonus feature in the new slot is the Win Booster feature that is situated on the left-hand side of the reel set. When you activate the Win Booster button, you will notice a pop-up on your screen that will indicate that all jackpots and cash prizes during the HyperHold feature will be increased. Please keep in mind, however, that you'll need to pay an additional 1.5x your stake to take advantage of this feature. With the Win Booster active, you can look forward to a phenomenal payout of 3,333x your stake when you trigger the Mega Jackpot in the game.

The reel structure in this new slot is presented on a treasure map to further compliment the theme of the game. The highest-paying symbol on the reels is the ship's captain, increasing your bankroll by up to 20x your stake when five captains are displayed on a single payline. You will also be greeted by the quartermaster paying up to 15x your stake, a parrot paying up to 12 times your stake, and two swords paying up to 10x your stake. The low-valued symbols include red spades, purple hearts, green diamonds, and blue glovers.

Before starting your pirate-themed adventure, you will first need to decide how much you are willing to spend on each spin. Thankfully, the new slot comes with 25 bet options, catering to a wide audience of players. You can bet as low as $0.10 a spin or you can chase some truly astonishing rewards when you bet the maximum value of $50.00 a spin. You will also have extra help with additional features, including a Turbo Mode, an Autoplay feature, a Max Bet button, and Sound Settings.

Where to Play the new Adventures of Doubloon Island Slot

The new Adventures of Doubloon Island slot from Microgaming and Triple Edge Studios offers a 96.01% return to player percentage and is a high volatility game where payouts take their time before they arrive on the reel set. The slot is available at loads of Microgaming operators but we would advise you to play the new Adventures of Doubloon Island Slot at Bet365 Casino as newcomers will be showered with a 100% match up to $200 on their initial deposit.