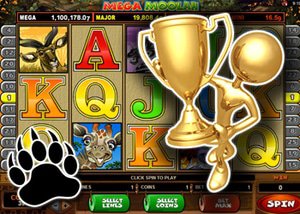 The latest Mega Moolah win took place on Saturday 5th November 2016 when one lucky Canadian player hit this Microgaming slot jackpot and took home a whopping $11,632,336. The name of the lucky winner has not yet been released and we are waiting on official Microgaming confirmation of the win. This information should be released later in the week and a name for this lucky Canadian player will be available.

This is the 29th time the Mega Moolah jackpot has been won since 2009. The largest ever Microgaming slot jackpot won on a mobile device was back in August of this year when a lucky player known as D.P. won €7.9 million playing on his iPad at Zodiac Casino. The win came about after the lucky player signed up for a promotion running on the casino called 80 Chances to Become a Million where players get 80 chances on progressive jackpot slots for just $1.

The biggest win ever on Mega Moolah was for £13.2 million and this record-breaking win happened on the 6th of October 2015 by a British player called Jonathon Heywood. Prior to this Microgaming slot jackpot win, a Canadian player held the record after winning CA$7.5 million in April 2015. Many of these progressive jackpot wins were done on $1 wagers and many were won by new players to the casinos. The jackpot is completely random and can be won on any spin so you never know when you could strike lucky.

The Mega Moolah jackpot can be won on a number of Microgaming slots and is triggered randomly. There are four progressive jackpots up for grabs. It a five reel, 25 payline, video slot that features a mini, minor, major, and mega progressive jackpot that can be won on any spin. The slots are suitable for players of all budgets and come with some great special features too including a bonus system with a payout of up to 15,000x your bet. There's a scatter symbol that triggers a free spins bonus round too and that comes with a multiplier that can reach up to 400x your wager. You can find out more about this Microgaming slot by reading our Mega Moolah slot review.