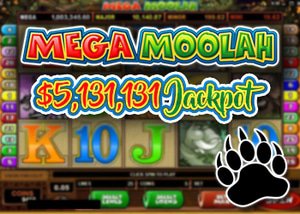 The Mega Moolah slot progressive jackpot has been hit once again and we can reveal that once lucky player took home a massive $5,131,131 cash prize.

This mega millions jackpot is another in list of winners to hit this Microgaming progressive jackpot and although information hasn't been released as to who the winner is or what casino the Mega Moolah slot jackpot was won, we can reveal that the player walked away with over $5.1 million.

This is the 39th mega millions jackpot to be won since it was launched back in 2009. On average this slot's mega jackpot pays out $5,218,360 and the largest ever prize was won by Joh Heywood at the Betway casino back in 2005 for a massive £13,212,882. They have been some huge Canadian wins over the years too including the biggest every mobile progressive jackpot win.

The Mega Moolah Mega jackpot is available on several of the Microgaming slots and available at some of the best online casinos in the industry. The prize fund grows every time the game is played and the jackpot is awarded randomly so you never know if you'll get that lucky spin. We will reveal more details about this latest win once they become available.

Besides the fact that you can win millions of dollars with just one spin, the Mega Moolah slot also boasts plenty of other great features, such as bonus games, multipliers, free spins, wilds, scatters, and it is one of the most popular games with players. It can be enjoyed on mobile and desktop devices and with a random jackpot, you never know when luck will be on your side.

Mega Moolah has paid out more than half a billion dollars to date and Microgaming's progressive jackpot network is the largest in the world. The game itself is a 5 reel, 25 payline video slot. It comes with a wild symbol that can substitute for all other symbols and has a 2x multiplier on all wins. There is a free spins round that is triggered by the scatter symbols and awards players with 15 free spins with a 3x multiplier that can be retriggered. And, there's a four tiered progressive jackpot. The mega jackpot is where the big wins come from and it offers a top prize of at least one million. The next level down from this is the Major progressive which starts at 10,000, followed by the Minor progressive which starts at 100.00, and then there's the Mini which starts at 10.00. The thing to remember if you want to play for the progressive jackpot is that you need to bet the maximum amount on all paylines to activate it.

Who knows, you could be the next Mega Millions jackpot winner. Be sure to check out our recommended list of Microgaming casinos for great bonus deals.