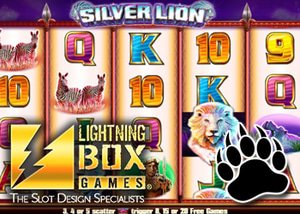 Lightning Box, a specialist in the design of slots, has released the new Silver Lion slot, which has roared in growth at casinos like LeoVegas.

Players have big wins presented to them in a 5x4 reel, 1,024 ways to win slot. An adventure expanding the length of the African Savannah and its sweeping plains is presented while searching for the mythical silver lion.

Zebra's, hippos, meerkats and tribesmen of vicious intent will be met on this journey. The mythical beast presenting itself from the undergrowth of the savannah will initiate the bonus rounds and grand payouts. These creatures are built in a high-definition format under the use of HTML5 code. Desktop and mobile devices both have access to this game because of its coding context. The authentic soundtrack and striking graphics transports punters to the land of indescribable wilderness.

The game was released to the public on December 7th, 2016. Before the public release, the game was available only at LeoVegas. This casino retaining exclusivity for a week prior to its global release to all Lightning Box Casinos. On the 7th Per Causley, the Managing Director and Co-founder of Lightning Box, said: "Silver Lion slot is an exquisite slot offering players substantial prizes by multiplying stacked prizes by 27x their estimated value. The math model introduced into this game ensures that players are entertained and engaged as an equal measure." Causley continued by saying: "In our growing portfolio of expansive games, Silver Lion is a great addition. It's the result of hard work which took months to accomplish. Those behind this games development cycle are relieved to see its final release. We're sure that the public is enjoying the game as much as we do."

The Silver Lion Slot online press tour, over the course of 31 days, initiated popularity for this Lightning Box game before its inevitable release. During the week of exclusivity at LeoVegas, Karolina Pelc, Head of Casino Operations at LeoVegas, said: "We're happy to once more deliver on the promise to bring new games first to our customers. We're confident, as is Lightning Box, that slot Silver Lion will become popular at the casino."

All indications point to this game being one the holiday season's best. Their next game, Chilli Gold x2, was recently announced to be coming to casinos such as Tropezia Palace Casino. This is a wonderful casino that offers a warm 100% match bonus up to $100 when you register and deposit today. This is on top of its on-going promotions such as TGIF Fridays, Ladis Night, Gentlemen Night and a VIP program that treats you like royalty.