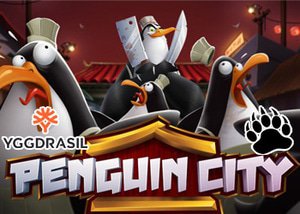 Rescue imprisoned penguins from the food emporium in the new Penguin City slot from Yggdrasil Gaming.

Penguin City is ruled by the mighty Penguin Emperor who has enslaved a waddle of penguins in his food emporium. Unable to escape, these flightless penguins are in desperate need of your assistance to help them find refuge where you'll be handsomely rewarded for your efforts if you can successfully lead them to freedom.

The new Penguin City slot was developed by Yggdrasil Gaming and is marvellously presented across 5 cartoon-infused reels with three rows and 243 Ways to Win. The reel set is beautifully embedded in a food stall and offers an abundance of bonus features, such as Emperor Stacked Wilds, Sticky Wilds, and a Penguin Escape Mode along with a top jackpot prize worth 250 coins in the base game.

Every time a winning combination is triggered, where a regular wild symbol forms part of the win, the Penguin Escape Mode is triggered. During the Penguin Escape Mode, you'll be whisked away to the kitchen where the waddling penguins will attempt to make their escape. The regular wild symbols will transform into sticky wild symbols and will remain in position while re-spins are awarded. The re-spins will continue until no more winning combinations are formed.

In addition, each penguin that successfully escapes has the potential of swapping a random symbol to transform it into a winning spin or will have the ability to add an additional wild symbol onto the reel set. During the Penguin Escape Mode, you will also be introduced to the Stacked Emperor Wild symbol which will only feature on the third reel during the Penguin Escape Mode. When he appears, he will move down one position after every spin. No penguins will be able to make their escape when the Stacked Emperor Wild symbol is displayed on the reels.

The new Penguin City slot comes equipped with a broad range of betting options even though you won't be able to adjust the paylines as it features 243 Ways to Win. Players can start their reel-spinning adventure from as little as $0.10 per spin or increase the cash bet up to a maximum of $125 per spin. The slot produces 18 different coin denominations, ranging from $0.004 up to $5.00, giving both newcomers and slot veterans ample flexibility when it comes to betting choices.

Although the slot is based on penguins, you won't find any on the reels during the base game as they are all slaving away in the kitchen to create delicious meals. The symbols that are displayed during the base game include a Chinese takeaway box filled with noodles, paying the highest jackpot prize worth 250 coins, followed by soya sauce, a boiling pot of fish, a bowl of soup, a meat chopper, and four card suits that represent the lower valued symbols in the game.

Where to Play Penguin City Slot

With a mind-blowing return to player ratio of 96.20%, the new slot creation from Yggdrasil Gaming can be enjoyed at a wide selection of premium online casinos. Grizzly Gambling highly suggests that you play the new Penguin City slot at LeoVegas Casino where you can enjoy a 200% bonus up to $100 and free spins when joinig the casino for the first time.