Monopoly Live Game to be Released at LeoVegas Casino 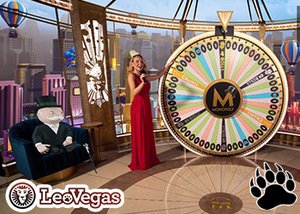 If you are a fan of the Monopoly board game, then you will be ecstatic to hear that LeoVegas Casino is about to release a new live online game based on the board game.

Evolution Gaming in partnership with Hasbro has joined forces to create a new Live Monopoly game that is about to go live exclusively at LeoVegas Casino in March.

Based on the world's favourite board game, this new release from Evolution Gaming live casino studios offers an exciting twist to popular Dream Catcher game and combines 3D animations and sound effects to redefine Live Casino entertainment forever. Furthermore, players have the opportunity to boost their bankrolls with multiple wins!

Add to the electrifying 3D animations and appealing audio graphics and you will get a new knockout game to experience on all levels. The object of Monopoly Live is rather straightforward. A live game presenter spins the super-sized, vertically fixed wheel and gamers forecast the segment the wheel is going to halt at after the spin. In addition to the numbers, the wheel also consists of "CHANCE" segments rewarding random cash awards or multiplier bonuses. Furthermore, there are 2 ROLLS" and "4 ROLLS" segments too, which activate the rousing 3D Bonus game.

For players to be eligible for the Bonus Game, you need to place your wager on 2 ROLLS" or "4 ROLLS" in advance, before the wheel rests on them. During the 3D Bonus attribute, you will join up with Mr Monopoly in the 3D Monopoly world and go around the board gathering prizes, multipliers and more. If you have not positioned your wager on one or the other of the stated segments, you can still have the benefit of viewing the Bonus game, but then again you will not be able to receive rewards.

New Live Monopoly is not the only exclusive game that is about to be released by LeoVegas. Two additional Evolution Live Casino games will soon be rolled out, namely:

Ready to experience the new Live Monopoly in 3D? Then check it out at LeoVegas Casino and receive a welcome package when you register a first-time player account. Be sure to keep an eye on the promotions page of the website so you stay up to date with other exclusive promo offers as they become available.