Claim your share of $10,000 every week at LeoVegas Casino for the month of August 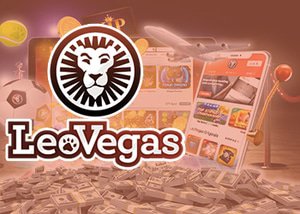 Join LeoVegas Casino and participate in Mega Cash Winning Tournaments throughout the month of August where you can claim your share of $10,000 in cash every week.

Throughout the month of August, LeoVegas Casino will be home to Mega Cash Winning Tournaments where each tournament will be worth $10,000 in cash, allowing you to walk away with a cash prize every week. To participate in the Mega Cash Winning Tournaments, you will simply need to play on qualifier tables, starting on Sunday and ending on Thursday each week, to win your share of the prize pool up for grabs during this incredible promotion.

LeoVegas Casino is powered by powered by Microgaming software, NetEnt, Evolution Gaming, BetSoft, NextGen, and Yggdrasil Gaming. The latest promotion from this renowned online casino is another reason why LeoVegas is ranked as one the top online gaming destination in the world.

This exciting promotion is exclusively available at LeoVegas Casino and will consist of 4 cash tournaments throughout the month of August. There will be one cash tournament for each week in August and every tournament will offer a guaranteed prize pool of $10,000 in cash which will be shared amongst the top players for that week. This means that you can get your hands on $40,000 in guaranteed cash prizes during the month of August.

To add an extra layer of excitement and thrill to the promotion, LeoVegas Casino will provide two Blackjack tournaments and two Roulette tournaments. Every week, players will be required to participate in selected games to successfully enter the week's tournament and accumulate points to get ranked on the leaderboard.

The first week, valid from 5 August until 9 August, and the second week, valid from 12 August until 16 August, will both feature online blackjack table game and tournaments. During the first 2 weeks of Blackjack tournaments, players can ascend up the leaderboard by simply playing on any Live Blackjack table games within the Chambre Séparée Live Casino to accumulate points. The points you earn during the Live Blackjack tournaments will greatly depend on the type of bets you place and win. For example, you will receive 10 points for a normal win, 25 points when you manage to win with Blackjack, and 75 points when you win from a Side-Bet. It's worth mentioning that you'll need to make a minimum wager of $10 to potentially get a normal or blackjack win and a minimum wager of $2 to potentially get a side-bet win.

It's important to know that the higher you manage to rank on the leaderboard, the higher your cash prize will become. You will also have a new challenge every week to rank on the leaderboard as each week will present a new tournament along with $10,000 up for grabs. The winners for every week is going to be announced each Friday and the winnings for each player will be credited on the same day.

This exclusive promotion at LeoVegas Casino will only be available from 5 August 2018 at 10:00 am CEST until 30 August 2018 at 23:59 pm CEST. Any gameplay that falls outside this promotional period will not contribute towards the promotion. Players are welcome to participate in the Mega Cash Winning Tournaments on any device, such as desktop, mobile, and tablet to enter this promotion. Players are allowed to wager with either their bonus money or cash money during the promotion. Players need to accumulate points by playing on qualifier tables to ascend up the leaderboard. LeoVegas Casino standard terms and conditions apply.