Leander Games Partner With Genii - Online Gambling Games For All! 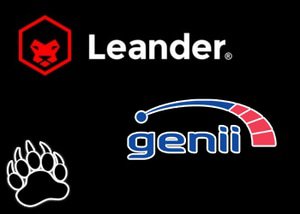 It has just been announced that Leander Games have sealed a deal and entered into a new partnership with Genii, that will now see them offering 130 plus additional games on their platform.

Personal Interaction On A Wide Array Of Games

This latest development will allow access to Genii's gaming portfolio that includes a wide range of interactive games, including their Spin 16 games along with patented i3D feature. The new content will be delivered to the casino market via Leander's remote gaming server, and the package will allow players to personally interact with reels, by swiping from left to right as well as up and down.

Commenting on this new agreement Steven Matsell CEO of Leander Games said that they were delighted with the opportunity to introduce the variety of Genii's online gambling content with the ability to now offer it through their LeGa product.

Mr Matsell went on to say that their partnership would allow Leander to diversify whilst at the same time broaden their existing offering to their current customers, especially in view of the addition of Spin 16, which he considered to be a stand-out product range.

Sales Director at Genii Nick Barr, was equally upbeat and exclaimed that his company were particularly happy with this latest coming together, that will now allow them to become a major provider to the Leander Games' LeGa online gaming platform.

Mr Barr went on to say that Genii have enjoyed great traction over the past year, and he attributed this to the diverse collection of engaging and interactive titles at their disposal. According to the company director, the combination of Genii's expertise along with the rapid delivery and global reach of Leander Games, everything's in place for what he considers to be a great relationship.

As stated Genii currently have 130 online casino games on offer that have been developed primarily with the focus on engagement and interaction. As the years have gone by amongst other things, the company have created patented gaming titles including their flagship mainstay namely the Spin16 range of online games. As already mentioned this will allow Leander Games players to have direct interaction with the slots reels of whichever games they choose to play.

By and large the Genii product range is available across land based gambling venues as well as desktops and mobiles. This ensures that all players are equally catered for and as a result ensures the gaming experience they expect can be delivered to them, regardless of where they happen to be located.