Home News Join in the Winter Wishlist at Bet 365 Casino 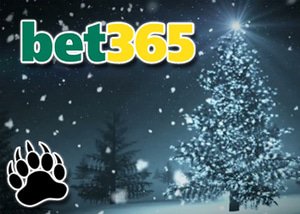 The Bet 365 Winter Wishlist is here so you can be ready to enjoy the festive season. This Christmas bonus promotion takes place from now until December 22nd.

The exclusive gifts available include some of the year's top gadgets and include Beats by Dre and the Xbox One S as just two of the items up for grabs. There is also weekly gifts during the bet365 Christmas bonus of £50, £100.00 and £250.00 to fill up your stockings and will be rewarded as M&S Vouchers should you win with one-line, two-line or a full house.

This bet365 Christmas bonus promotion may be played Saturday to Thursday between 11.00 and 22.30 United Kingdom time until the 22nd of December. One ticket may be earned each time you win in the Stocking Filler games, a total of 36 tickets may be earned each week. On Friday, the "All-Winners Finale Game" will be held and this is where the largest prizes of this promotion can be won.

During this promotion, every £5 that is wagered in the "Gifts Galore" room will initiate a payout of six tickets. These tickets may be used on prize-filled games during the weekly party hour. The party hour runs each Friday at 20.00 uk time.

During each of the three weeks in this Winter Wishlist promotional event, four new games will be selected to play their part in the weekly tournaments. These games will be tailored for the promotion, with the main game that will be used being Stocking Filler.

Each winner of the three separate no deposit finale games will be contacted inside of two business days after the game is completed. Those players who do not return contact to Bet 365 within a period of several days will forfeit their prize. During the finale game, if two or more players remain tied in the same position, then prizes will be split equally amongst the winners.

This promotion event is available on all platforms including mobile and PC platforms having access to the tournaments taking place. The Bet 365 Christmas bonus bigger prizes that will be awarding include a Sony PS4, Xbox One, iPad Air, iPad Mini, Kindle Fire or holiday vacations.

Across the world, bingo sites are getting ready to unveil their festive promotions or giveaways. Bet365's Winter Wishlist has cut the curve, giving their prizes away a week earlier then the competition. Entering this tournament might just save you some money on your Christmas Shopping.