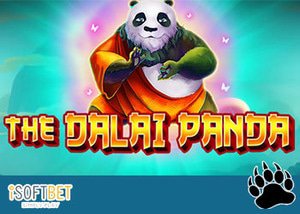 Make your way to Asia and meet a magical, floating panda bear that generously rewards you with wild symbols in the latest slot creation from iSoftBet.

This new Dalai Panda slot will undoubtedly make an impression at first glance thanks to its distinctive and unusual reel configuration. It also boasts with exceptional graphics which is an added bonus, especially when you compare it to other panda-themed slots we previously reviewed. You will also be treated to gentle and soft Oriental music that increases in volume each time you trigger a winning combination.

The new Dalai Panda slot from the creative minds at iSoftBet online casino software features a rather unusual reel layout consisting of two reel sets, each presenting 3 reels and 3 rows along with 27 Ways to Win. The magical, floating panda is situated in the middle of the two reel sets as it hovers over the free spins bank. Players will also be treated to several intriguing bonus features, including bonus symbols, wild symbols, free spins, and multipliers along with a 500-coin jackpot prize up for the taking.

The lush green bamboo tree will act as the slot's wild symbol and will stand in for all symbols to create a winning combination, except for the bonus symbol. Please be aware that the bamboo wild symbol will not feature on the reels. Instead, the Dalai panda will randomly reward you with between 2 and 4 bamboo wild symbols which he will scatter across the two reel sets after you initiate a spin.

During the base game, every time you trigger a winning combination on both reel sets simultaneously, the Free Spins Bank located underneath the Dalai Panda will increase with 1 free spin. The Free Spins Bank will start at 5 free spins and will increase until you unlock the free spin feature with 3 Ying Yang bonus symbols. Once the free spin feature is unlocked, the Dalai panda has the power to summon extended wilds, extra wilds, and 2x multipliers to increase your winnings. You can also earn additional free spins when you display 2 or more Ying Yang bonus symbols during the free spins round.

The new Dalai Panda slot from iSoftBet comes equipped with a sensational range of vibrant and Asian-themed symbols to provide all the winnings. The highest paying symbol is the peacock paying up to 500 coins when 6 are displayed on a winning payline. You'll also find monkeys, turtles, songbirds, and goldfish, while the lower paying symbols include a pink Ace, a red King, a blue Queen, and a green Jack.

As the new Dalai Panda slot does not feature traditional paylines, you won't be able to change the number of active paylines in the game. However, you can choose from a wide range of coin values, starting at a mere $0.01 and increasing to a maximum of $1.00. This will give you a minimum bet value of $0.30 per spin along with a maximum bet value of $30, making it ideal for those that are new to the world of online slots.

Where to Play the new Dalai Panda slot

The new Dalai Panda slot boasts with a return to player ratio of 96% and is available at all iSoftBet Casinos from 18 October 2018. If you are looking for an online casino with an excellent user-interface, loads of exciting promotions, and tons of top-quality games from several leading software providers, we suggest that you play the new Dalai Panda slot at MrXbet Casino where you can also look forward to an incredible 100% welcome package up to a maximum of $500.