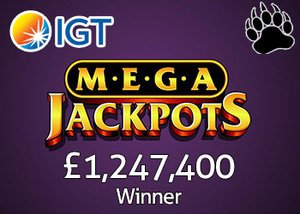 IGT's MegaJackpots Progressive slot proved the right choice for one lucky player who found this weekend one for the record books when they hit the MegaJackpot progressive for £1,247,400.

While details about the win have not been released as of yet, we can confirm that this is the thirty-sixth win of the MegaJackpots progressive. This weekend's win was above the average win of £841,420, which is awarded every three months on average. The largest MegaJackpots win recorded came in 2013 when a player triggered a £2,148,947 win.

The MegaJackpots Collection of Slots

MegaJackpots Monopoly, one of its most popular is based on the famed board game. It includes two bonus games, the Pass "Go" bonus and the "Chance Win Spin bonus". The Pass "Go" feature will trigger once three or more dice appear, which in turn triggered the Monopoly board game bonus screen. The Chance Win Spin bonus is a free spin feature that can see substantial wins follow. The progressive is awarded when five MegaJackpot symbols are seen on the middle payline.

MegaJackpots Cluedo, the second slot in the series, is based on another popular board game, Cluedo. This slot features a free spin feature with wins achieved tripled. As with the Monopoly versions, the jackpot requires five MegaJackpot icons on the middle payline.

The final game in the series is MegaJackpots Cleopatra. This twenty payline slot includes the change to win 15 free spins with wins being tripled. Winning its jackpot is achieved in the same manner as the other two in the series and requires five MegaJackpot symbols on its middle payline.

Become the next big winner

While there are many IGT powered casinos to choose from, one of the most popular is Betsson Casino. This site is powered by multiple software providers, including IGT, Red Tiger Gaming, Playtech and Rabcat. New players can enjoy a 100% match up to $100 at Betsson Casino to play slots, bingo, table games, and many more. Register today and take advantage of the new player welcome bonus and you too might be making news with a jackpot of your own!