The New Panda Panda Slot from Habanero is Here 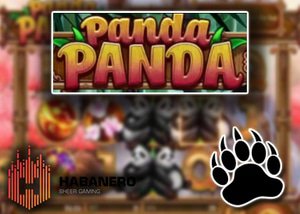 The exciting new game gets you closer to your stacked panda buddy since he doubles up and then a pandemonium follows.

Players get to visit the most beautiful valley with a crystal clear waterfall surrounded by cherry trees during main play, and the bonus round plays off much deeper into the bamboo forest. Habanero's New Panda Panda slot is a five reel game featuring a wide variety of winning options across 243 ways to win. The game should be labeled with a "cuteness alert" since the cuddly main characters are bound to keep players hooked for hours.

Three or more of the panda eye scatters triggers the Panda Panda feature and players get to enter the bamboo forest equipped with ten free spins. The free spins bonus round are flooded with additional wild panda's that hugely inflate players chances to strike heavenly rewards. Although it's the three progressive jackpots that keep catching your attention as they mini, major and mega jackpot takes turns in showing off high valued payouts.

Hitting a big win calls for celebration and the cuddly pandas jump and slide down the bamboo shoots to show their joy. Players at Habanero Casinos such as Bitstarz Casino benefit from the paylines rewarding right to left and left to right, and the outcome of each spin depends on which way pays the most.

Habanero is delighted with its latest release and Head of Corporate Communications, Tony Karapetrov shared that the developers latest release excites with stunning animation, brilliant graphics and he feels sure that the new Panda Panda video slot would be a hit with anyone who loves cuddly panda's while the bonus features will attract everyone one else. Panda Panda video slot will be on display at this year's G2E, and everyone has invited to experience the new game.

Panda Panda video slot is the latest addition to a batch of new content released by Habanero, the software developer will release ten new game titles during the year, and so far 2017 have seen four new releases. Currently, the Habanero gaming library features seventy-five video slots, fifty video pokers and nine table games available at forty-five operators and games can be enjoyed in twenty-one European as well as Asian languages.